On 5 May 2022, the National and University Library in Zagreb (NSK) launched War in Ukraine (2022), a new thematic collection on the portal of the Croatian Web Archive (Hrvatski arhiv weba, HAW), raising awareness of the dangers and tragic consequences of war and at the same time documenting the latest example in human history of how countries can unite, show solidarity and provide assistance in times of hardship.

In response to the Russian full-scale invasion of Ukraine since 24 February 2022, countries around the world joined together in helping Ukraine to withstand the aggression. States as well as international organisations have been providing Ukraine with economic and military assistance, together with imposing harsh sanctions against Russia. All these developments have in large been part been based on official decisions, directives, resolutions, measures as well as reports and assessments. Also, along with the news on the war in Ukraine becoming a significant share of the content published on news sites, many websites related to assisting Ukraine have been launched.

Resources that the Archive gathered for the new thematic collection in collaboration with the Library’s Official Publications Collection, the NSK European Documentation Centre and the wider public include content published on the EUR-Lex, Publications Office of the European Union, European Commission, United Nations and North Atlantic Treaty Organization (NATO) websites, as well as on the websites set up by the official bodies of the Republic of Croatia, such as Croatia for Ukraine and others.

Considering the continuing Russian aggression, the collection, which currently offers access to 162 URLs, totalling 86 GB of data, will be extended, in which regard the Archive is planning to conduct another harvesting soon.

Demonstrating its support for Ukraine and taking a stance against aggression, the National and University Library in Zagreb is making available its services free of charge to Ukrainians refugees and has published three special bibliographies bringing together titles in the Library’s collections related to Ukraine. 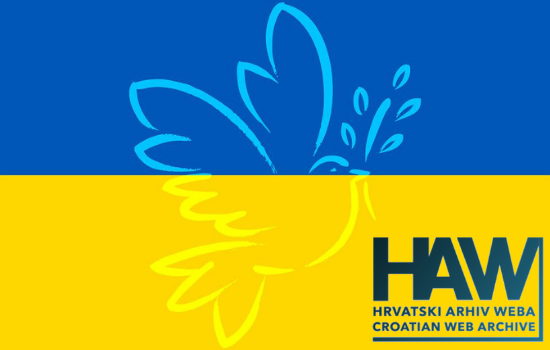