An exhibition featuring the cultural legacy of Ivan Mažuranić (Blago Ivana Mažuranića u Nacionalnoj i sveučilišnoj knjižnici u Zagrebu) will open on Tuesday, 4 November 2014 at 12.00 in the lobby of the Library.

The exhibition will be put on to mark the 200th anniversary of the birth of Ivan Mažuranić, a 19th-century Croatian writer, statesman and linguist, under the sponsorship of the Croatian National Commission for UNESCO. Its purpose is to show the extent to which Mažuranić, except as Croatia’s governor under the Austrian Empire, influenced Croatian culture and show how this influence has remained present to this day. Mažuranić’s greatest contribution to Croatian literature is his writing of two missing cantos of Gundulić’s Osman and a narrative poem entirely of his own making, Smrt Smail-age Čengića (The Death of Smail Aga).

The exhibition will thus highlight some of the valuable Mažuranić’s manuscripts preserved at the NUL Manuscripts and Old Books Collection, such as the verses he wrote for Osman, the earliest editions of Smrt Smail-age Čengića, as well as its translations in numerous languages, such as Hungarian, Armenian, Czech, Polish, Russian, Albanian, German, English, Spanish, Italian, Swedish, Latin, Esperanto, etc. It will also display works of Croatian music and visual arts inspired by Mažuranić’s works.

The exhibition will be on view until 8 November 2014. 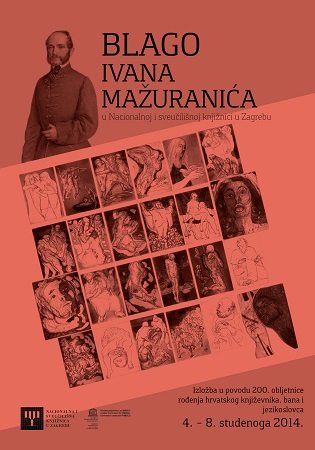