The exhibition was opened by Director General of the National and University Library in Zagreb Tatijana Petrić, who highlighted that this anniversary marks “one of the most significant events in our history. The conquest of Szigetvár, which ended in the heroic death of Nikola Zrinski, left Croatia shrouded in grief, but also stopped the Turks in their military campaign targeted at Vienna. Today, 450 years later, we are able to trace the ways in which this “battle that saved civilisation” has left its mark on the Croatian cultural space.”

After Ms. Petrić’s brief introduction, present visitors were addressed by Fellow and President of the Croatian Academy of Sciences and Arts Zvonko Kusić. Authors of the exhibition, Head of the NSK Manuscripts and Old Books Collection Ivan Kosić and Head of the NSK Print Collection Mikica Maštrović, also presented the exhibition. Mr. Kosić emphasised that the name of Nikola Šubić Zrinski (Nicholas Zrinsky; Miklós Zrínyi) remains permanently inscribed in Croatian and European history owing to his heroic deeds and an unrelenting defence of the strategically important fortress of Szigetvár in southern Hungary during which he was killed on 7 September 1566, while Ms. Maštrović pointed out the essential role of the Zrinski family in the collecting of important historical resources in general and the spreading of Croatia’s culture. Finally, Head of the NSK National Bibliography Department Lobel Machala presented various valuable resources in the Library’s collections related to the Szigetvár battle.

Displayed works of visual arts inspired by Zrinski’s heroic feat have been selected from the resources preserved in the Library’s Print Collection, while the exhibited works of music are part of the NSK Music Collection.

Since there are no surviving records on the Zrinski family owing to the confiscation of all of their belongings as a result of the 1671 royal order, and the devastation of their entire estate, which followed the unsuccessful Zrinski-Frankopan conspiracy, the books from their library are the only clues we have today to learn their story, providing us with such information as what languages they used, what interests they pursued, or details regarding their education. This valuable collection, providing a wealth of historical resources, was compiled by several distinguished noblemen of the Zrinski family of which Nikola Šubić Zrinski collected the first books. 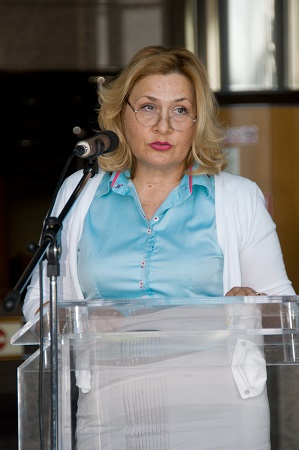 Director General of the National and University Library in Zagreb Tatijana Petrić.