Rijeka, Port of Diversity and 2020 European Capital of Culture

In 2020, during Croatia’s presidency of the Council of the European Union, Rijeka, the largest Croatian port, the centre of culture and art, and a city that has long been taking under its wing the most progressive Croatian, European and world artists, has been designated as the European Capital of Culture. Located at the convergence of the Mediterranean, Central and East European influences, it developed as part of as many as seven different states over the past one hundred years. In this way embodying a smaller version of Europe of a kind, it has always been home to dynamic developments, a symbol of the freedom of spirit and avant-garde ideas, and a city ready to welcome everyone.

The Rijeka 2020 European Capital of Culture (ECoC) programme, which opened on 1 February with the staging of Opera Industriale at the city port, the emblem of Rijeka and its industrial heritage, will include more than 600 cultural and artistic events organised by over 250 cultural institutions and organisations from Croatia and 40 other countries of Europe and the rest of the world.

Also, the Rijeka 2020 ECoC programme will include the renewal of the city’s cultural infrastructure, so based on EU funding, the premises of the former Rikard Benčić factory will be renovated to house the new buildings of the Museum of Rijeka, Rijeka Public Library, Museum of Modern and Contemporary Art and The Children’s House, the first such facility in Croatia.

Rijeka is the first Croatian city to be the European Capital of Culture and it shares its designation with Galway, Ireland. The two cities were preceded in this important role by more than 50 cities all across Europe, including Marseille, Linz, Graz, Dublin, Liverpool, Athens, Rotterdam, Genova, Lisbon, Pécs, and others.

Originally the idea of the Greek Minister of Culture Melina Mercouri and the French Minister of Culture Jack Lang, the European Capitals of Culture initiative was introduced in 1985 with the aim of spotlighting the wealth and diversity of European cultures, celebrating their shared features, strengthening the sense of belonging to a common cultural area among all European citizens, and fostering culture as a major vehicle for urban development. 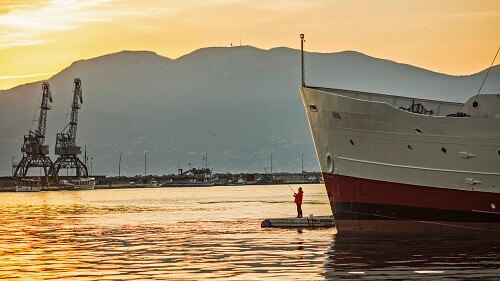 Rijeka, the Port of Diversity and the 2020 European Capital of Culture. Source: Rijeka 2020. d.o.o. Photo by: Borko Vukosav.