Wishing to pay homage to an outstanding Croatian conceptual artist Boris Demur, the National and University Library in Zagreb and Zagreb Academy of Fine Arts together published a special print portfolio authored by Vlado Martek, a versatile Croatian artist.

This special print portfolio, Sjeti se života – hommage Borisu Demuru, was presented on 7 April 2016 at the National and University Library in Zagreb by Mikica Maštrović, the portfolio’s editor-in-chief and Head of the Library’s Print Collection, Leonida Kovač, Vice-Dean at the Zagreb Academy of Fine Arts, and the author of the print portfolio Vlado Martek.

Boris Demur, the late and in every way extraordinary artist, whose name occupies a special place in the context of Croatian conceptual art, had a strong personal and artistic bond with Martek throughout his entire life, and the two also collaborated as members of the so-called Group of Six Artists (1975 – 1981), a famous Zagreb-based group of artists whose activities openly challenged and directly subverted the principles of the accepted “official” art and, even more important, the attitudes, perceptions and social relations creating conditions conducive to such art.

“Down this life all alone and as one of two; single parents to art when love so requires.
Two life mandates acted out close to each other, sometimes blending at their borders.
Let’s say, mostly golden moms and mostly black fathers, way too sufficient for the discord of grief, the well of all subsequent action.
Lucky were the topics we shared, such as idealizing girls /like after chancing, at the Temple of Augustus, upon Lili and Vesna, our platonic sweethearts/.
Then the topic of laughter that left its mark on us during childhood and for long after. Snow and twilight downtown, the multiplying by themselves of poetics yet to come.
Oh how plenteous is the extra meaning borne in the say-ing: art buddies. They were neighbours to wealth buried deep in the wings of the eyes.
There’s no hope for hopelessness, as our presentiment proved right. A life of likeness through the pairing of the wild and mild, airy and earthy, halfhungry and full.
Words and images, from symbiosis to a mannerist doom and freedom, always visiting and welcoming likeness and difference.
Teenage auras of urban melancholy, durable as the tragicomedy of flags.”

Vlado Martek, an excerpt from the print portfolio 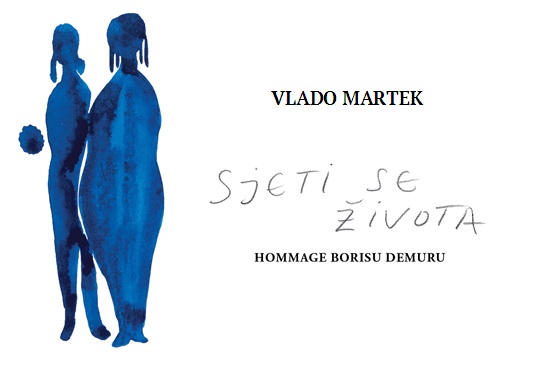