As the exhibition that will feature Joan Miró’s works from the Maeght Foundation (Joan Miró: remek-djela iz Fundacije Maeght) and be held at the Art Pavilion in Zagreb from 2 October 2014 to 8 February 2015 approaches, the Print Collection of the National and University Library in Zagreb wishes to present a particularly interesting and artistically valuable print portfolio Mavena, which was created by Radovan Ivšić and Joan Miró during the time that the two artists spent together in Paris. In 1960, this portfolio, containing verses by Ivšić and a lithograph by Miró, was published by Éditions Surréalistes. It was dedicated to French poet and surrealist Benjamin Péret, who, together with André Breton, was one of the founders of French Surrealism.

The print portfolio’s 14 pages contain text that was printed on handmade paper, petals and leaves of different flowers and plants and a lithograph. It is a bibliophilic edition vividly presenting two exquisite artists through the interaction of their two respective arts, the literary and visual. As Fellow of the Croatian Academy of Sciences and Arts Tonko Maroević once put it in his text on the collection of print portfolios at the NUL Print Collection, using the words of Tin Ujević, a famous Croatian 20th-century poet, ‘Print portfolios are “a brotherhood of images and letters”’.

The period of the 1950s was extremely trying for artists like Ivšić and in an act of protest towards the political atmosphere of that time which was acting against liberal art, he left his apartment in Zagreb and spent several solitary months finding his peace in translating Proust in a forest cottage in the highest part of Medvednica, the mountain overlooking Zagreb. Suppressed and banned in his homeland at that time, he found his freedom in Paris, where he arrived in 1954 precisely at the invitation of Benjamin Péret. In this great city, the very capital of art, Ivšić was finally able to follow his inspiration and give form to poetic and theatrical content that he carried within himself. In Paris Ivšić soon began socialising with artists with whom he shared similar inspiration, mainly surrealists. Among them, apart from Benjamin Péret, André Breton and Jean Benoît, were also the famous Joan Miró, Czech-French painter Toyen and writer Annie Le Brun, with whom he was going to spend the rest of his life. Along with their devotion to the principles of surrealism, these artists’ lives during the 1960s were marked by close friendship intertwined with art. Precisely in such artistic atmosphere brimming with enthusiasm for surrealist poetics Ivšić and Miró created Mavena.

Mavena became part of the NUL Print Collection in 1968. That year Ivšić returned to Croatia for the first time after leaving his homeland and brought with him this extremely valuable print portfolio, which shows that this distinguished Croatian writer was part of the circle of the most prominent European artists and made significant contribution to West European art and culture. 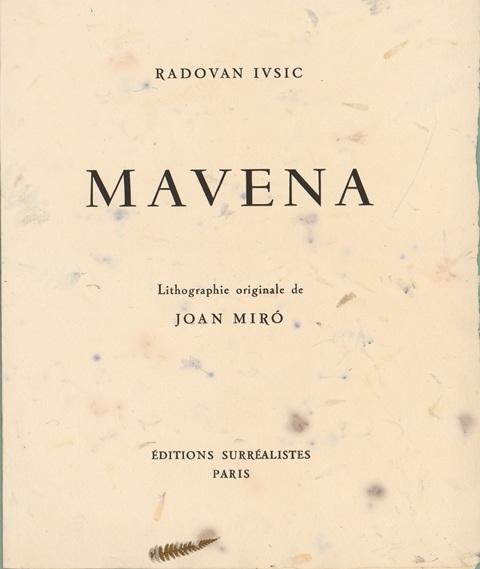