It has been 350 years since the death of the notable Croatian governor, general and poet Nikola VII Zrinski. Marking this great anniversary, the National and University Library in Zagreb, on the initiative of the Croatian Ministry of Culture, is preparing an exhibition highlighting the valuable treasures of Bibliotheca Zriniana, a library collection of the Zrinski family, compiled mostly by Nikola VII Zrinski.

By means of the 1671 royal order, which came as a consequence of the unsuccessful Zrinski-Frankopan conspiracy, the entire property of the Zrinski family was seized and all their estates were devastated. Owing to this, there is no preserved physical material on this distinguished family, but its surviving rich collection of books may tell us a lot. It offers many clues – we may find out about the languages that they used, subjects that they studied or found interesting, their education, and even places they visited.

The library was quite accidentally salvaged by Nikola VII Zrinski’s wife, Marija Sofija, since she decided to bring with her the entire family book collection when she left Čakovec after the death of her husband. That collection is now known as Bibliotheca Zriniana, and it is preserved as part of the Manuscripts and Old Books Collection at the National and University Library in Zagreb.

The library was moved a lot throughout its history – after being founded and located in Čakovec, it passed through Varaždin, Virovitica, Vienna, Moravia, and eventually found its home in then Royal University Library, the forerunner of the National and University Library in Zagreb.

Historical sources reveal that books in this valuable collection, now preserved at the National and University Library in Zagreb, were assembled during a long period, probably by several distinguished noblemen of the Zrinski family. Nevertheless, Nikola VII Zrinski undoubtedly stands out in this honourable succession as the one who made the greatest contribution to the collection, both in terms of the number of books that he collected and his compiling the library’s catalogue. 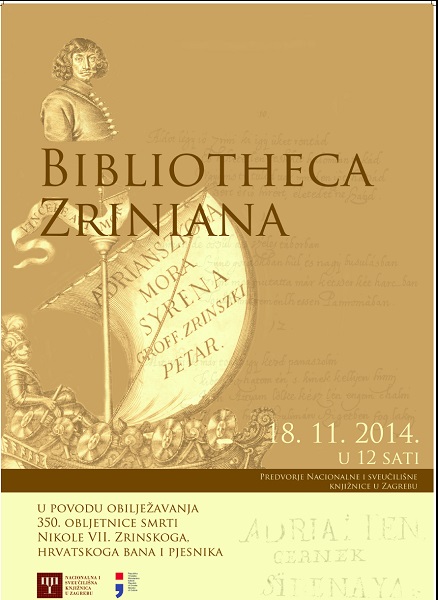 Poster for the NUL exhibition highlighting the treasures of the Bibliotheca Zriniana collection.