On 21 and 22 September 2015 the National and University Library in Zagreb hosted a meeting of The European Library’s Library Coordination Group. Tatijana Petrić, a recently appointed new NUL Director General, welcomed meeting participants in a brief introductory address, while Renata Petrušić, member of the ISSN Croatian Centre, Sofija Klarin Zadravec, NUL Digitisation Adviser, and Jasenka Zajec, NUL International Cooperation Adviser represented the Library. The meeting was attended by 27 representatives from 19 European national libraries, members of TEL, as well as representatives from The European Library and the Europeana Foundation.

Participants in the meeting discussed The European Library’s semi-annual report, its transition to a joint infrastructure with Europeana, methods of gathering data, ways and strategies of their publication and ensuring their availability, plans for cooperation initiatives and future projects.

The European Library (TEL) brings together Europe’s national and research libraries and their catalogues and collections. Its portal offers unique access to over 26 million digital units and more than 168 million bibliographic records. TEL also collects resources from the collections of its member libraries and delivers it to Europeana, the European digital library. The National and University Library in Zagreb has been a member of The European Library for a decade, while its cooperation with Europeana started in 2010, making the Library’s valuable digitised collections available to an international community of online users. 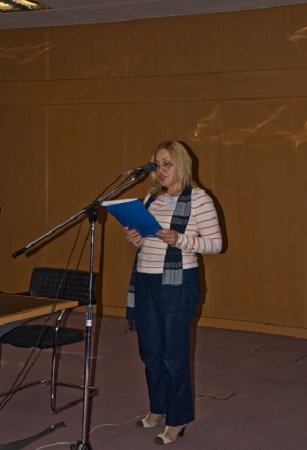 Tatijana Petrić, Director General of the National and University Library in Zagreb.