On Thursday, 5 February 2015 the National and University Library in Zagreb will host the opening of an exhibition dedicated to the 200th anniversary of the birth of Bishop of Bosnia and Syrmia Josip Juraj Strossmayer. This special Library’s exhibition has been prepared with the aim of reminding Croatian and international public of the initiator and sponsor of the most significant national cultural, educational and scientific projects in Croatia’s modern history. The importance of this anniversary has been acknowledged by UNESCO, which included it among significant international anniversaries in the year 2015.

The exhibition will feature the resources of the National and University Library in Zagreb related to the life and work of bishop Strossmayer and the historical context in which he lived which are today preserved as part of the Library’s Manuscripts and Old Books Collection and Print Collection. Selected materials from more recent, thematic bibliography will also be included.

The exhibition will open with the welcome addresses by Dunja Seiter-Šverko, Director General of the National and University Library in Zagreb, Fellow and President of the Croatian Academy of Sciences and Arts Zvonko Kusić, and Professor Miloš Judaš, Ph.D., Vice-Rector for Science, Inter-Institutional Cooperation and International Relations at the University of Zagreb. Ana-Marija Tkalčić, editor of the exhibition catalogue, will present the exhibition, while Zoran Grijak, scientific adviser at the Croatian Institute of History and an authority on Strossmayer, will give a brief talk about the bishop’s life and work.

This exhibition is part of the programme of the marking of the 200th anniversary of the birth of Josip Juraj Strossmayer organised by the Croatian Academy of Sciences and Arts, whose founding was initiated precisely by Strossmayer. On account of this strong connection that it has with Strossmayer, the Academy is preparing a series of events that will be held this year in Croatia and other countries in order to pay tribute to a man owing to whose vision and strength foundations have been laid for everything that this distinguished institution stands for today. Except for the founding of the Academy, Strossmayer may also be credited with the establishment of the modern University of Zagreb, therefore the National and University Library in Zagreb, as the central library of the Zagreb University, has every reason to take active part in the marking of this significant anniversary and in this way commemorate the human and historical greatness of Strossmayer.

The exhibition will be open for visitors until 18 February 2015. 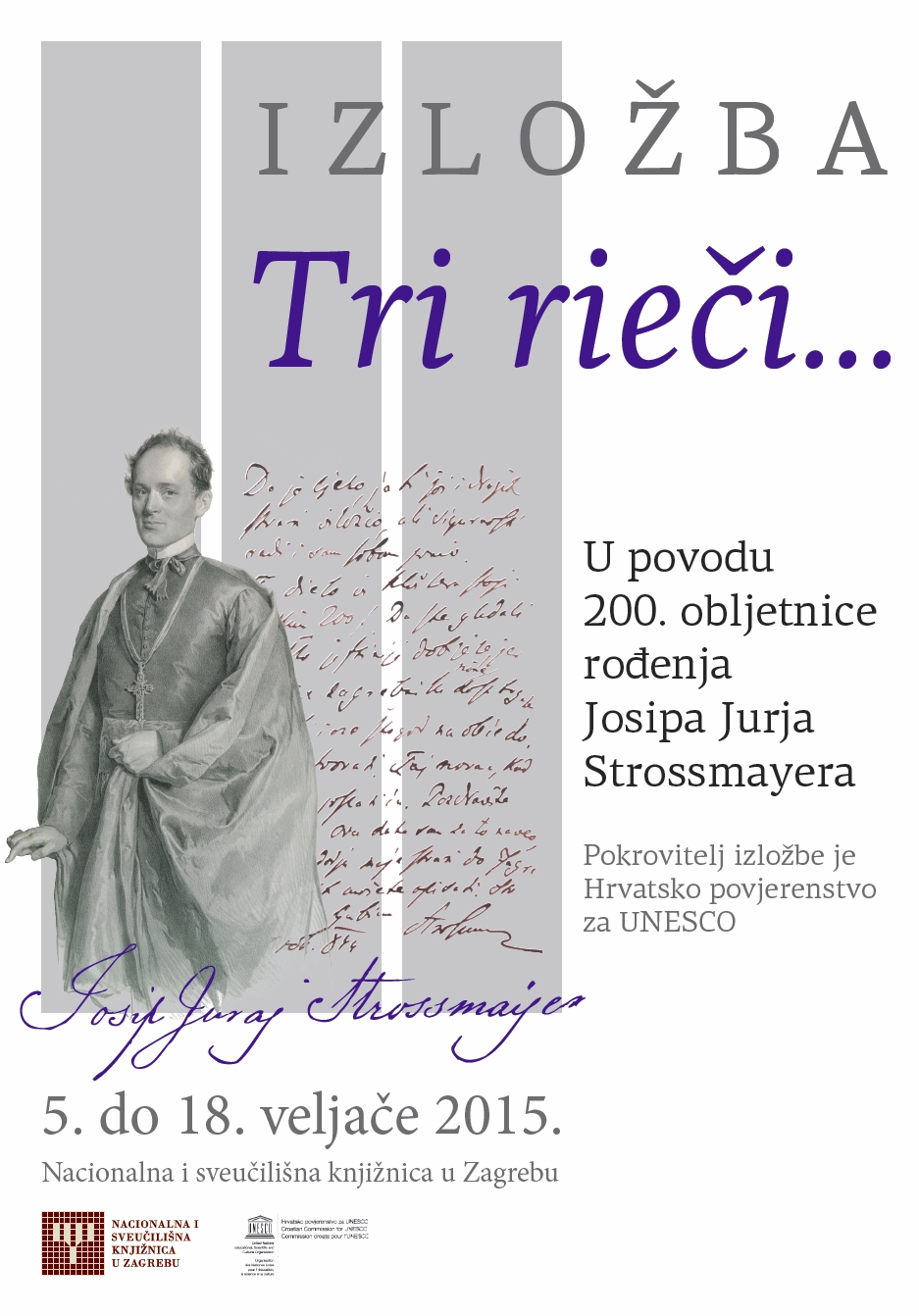 Poster for the exhibition dedicated to the 200th anniversary of the birth of Josip Juraj Strossmayer.