On 10 June 2022, in memory of the noted Croatian researcher and longtime Head of the Radiation Chemistry and Dosimetry Laboratory at the Ruđer Bošković Institute Dr Dušan Ražem (1944-2018), the National and University Library in Zagreb (NSK) received as a gift from the founder and manager of a London-based International Trust for Croatian Monuments (ITCM) Lady Jadranka Njerš Beresford-Peirse a valuable 18th-century document including relevant details from the life of the world-famous Croatian mathematician, physicist, astronomer, philosopher, diplomat and poet Rudjer (Ruđer) Josip Bošković (1711-1787).

The document, which is now part of the Library’s Manuscripts and Old Books Collection, was written at the request of a Spanish aristocrat de Fuentes, who in it confirms that on his journey from Paris to London Bošković accompanied him as a chaplain. Including a seal with de Fuentes’s coat of arms and written in Paris on 17 May 1760, the document shows that Bošković was in London eight months prior to being elected a Fellow of the Royal Society, to which he dedicated his 1760 work De Solis ac Lunae defectibus.

Lady Beresford-Peirse, together with the late Dr Ražem of the Ruđer Bošković Institute and on his instructions, searched archives and libraries in London looking for a well-known 1760 portrait of Bošković by the famous British painter Robert Edge Pine. Although Lady Beresford-Peirse and Dr Ražem never discovered the portrait or any trace of it whatsoever, their efforts however resulted in the organisation of an exhibition in 2011 at the Royal Society marking the 300th anniversary of Bošković’s birth and the 250th anniversary of his election to the Society. Authored by Professor Ivica Martinović, the exhibition was opened by a Cambridge professor and the Society’s Fellow, the late John D Barrow.

Lady Beresford-Peirse was informed by art historian Flora Turner of the inclusion of the document in a 2021 auction. Learning about the document’s authenticity and value, Lady Beresford-Peirse purchased it and decided to give it as a gift to the Library, which added it to Bošković’s manuscripts and maps preserved in its collections. The Library will symbolically present the document’s digital copy to the Ruđer Bošković Institute, Croatia’s leading scientific institute, with which the Library has a long and successful cooperation.

Also worth mentioning on this occasion is a successful cooperation between the Lady Beresford-Peirse-headed ITCM and the Library, whose conservation-and-restoration specialists, led by the former Head of the NSK Preservation and Storage Department Dr Dragica Krstić, worked on salvaging written heritage preserved in Šibenik, a port and city in southern Croatia distinguished for its centuries-long culture and scholarship and boasting a World Heritage Site, The Cathedral of St James. 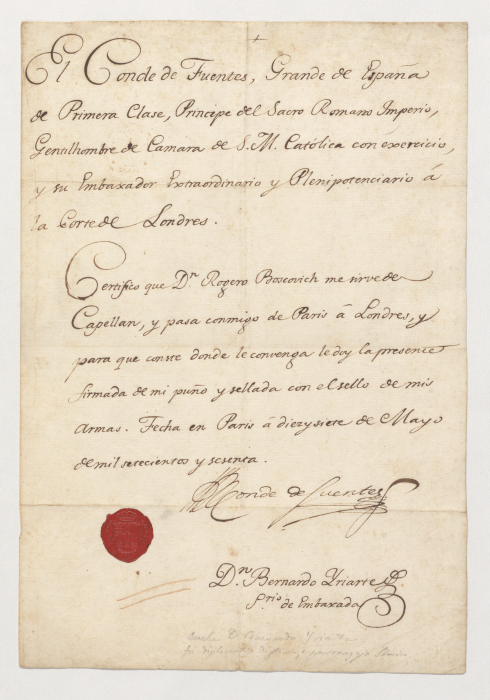 A valuable 18th-century document mentioning the world-famous Croatian mathematician, physicist, astronomer, philosopher, diplomat and poet Rudjer (Ruđer) Josip Bošković (1711-1787) which the founder and manager of the International Trust for Croatian Monuments (ITCM) Lady Jadranka Beresford-Peirse gave as a gift to NSK, on 10 June 2022.