NSK publishes the 17th issue of its journal, “The Voice of NSK”

The National and University Library in Zagreb published the 17th issue of its journal, The Voice of NSK (Glas@NSK.hr), which highlights in its Feature section the response of libraries to the COVID-19 crisis and presents various ways in which they adjusted their activities and operations to the pandemic-related unprecedented and challenging conditions. Under such trying circumstances and with the human and other resources that they had at their disposal, the majority of Croatian libraries did their best in responding to the needs of their users and responsibly fulfilling their vital social role, thus proving themselves irreplaceable in times of crisis.

Despite the pandemic, the staff of the National and University Library in Zagreb were most busy, as presented in this issue’s In the focus section, which opens with a feature on the recognition that the Library received for all its work in the previous year, the 2020 Library of the Year Award, which the Library was presented with as part of the celebration of the last year’s Croatian Library Day.

In the focus also brings articles presenting the Digital Laboratory of the National and University Library in Zagreb, NSK DigiLab, the newly adopted Resource Description and Access Code for Libraries, Archives and Museums (Pravilnik za opis i pristup građi u knjižnicama, arhivima i muzejima), as well as the support and professional assistance that the Library provided to Croatian libraries damaged in the 2020 earthquakes. It also brings news about the latest developments with regard to eResources: Improving access to electronic resources offering scientific and specialised information, the Library’s project aimed at providing and maintaining access to electronic resources for Croatian scientific and academic community, the Library’s takeover of the Croatian Libraries Register (Upisnik knjižnica u Republici Hrvatskoj) and the introduction of the Croatian Legal Deposit Regulations (Pravilnik o obveznom primjerku). The section closes with a feature presenting the Library’s newly opened Convention Centre.

Marking the 500th anniversary of the birth of Matija Vlačić Ilirik and the 400th anniversary of the birth of Nikola VII Zrinski, this issue’s NSK treasures section presents items in the Library’s collections shedding light on the life and work of these great figures of Croatian cultural heritage. Commemorating Vlačić, the section brings a feature on Flaciana, the Library’s collection preserving 80 volumes, i.e. 88 works authored or co-authored by this prominent 16th-century Croatian Protestant theologian, historian and philologist, while the other article spotlights Zriniana, the Zrinski family library, and the invaluable treasures of bookbinding art that it holds.

This issue’s Donations section features a treasure trove added to the Library’s Music Collection last year – the autographs of Miroslav Miletić, a distinguished Croatian composer and music educator, whose prolific oeuvre and artistic width left a permanent mark on Croatian music, and beyond.

In the past year, the National and University Library in Zagreb took part in many joint projects and cooperation programmes, acting either as a project coordinator or an important partner institution. A project particularly standing out in this context is eCulture – Digitisation of cultural heritage, a 2019-2022 national collaborative project run by the Croatian Ministry of Culture and Media, in which the Library acts as a partner institution, together with the Croatian State Archives, Museum of Arts and Crafts and Croatian Radio Television. The Cooperation section also presents the preparation of Solidarity in culture: Heritage protection under conditions of crisis, the 2021 international virtual conference that the Library organised in response to the current, unprecedented threats to global cultural heritage, as well as the Library’s successful cooperation with the Institute for Youth Development and Innovation (IRIM) on the development of digital society.

This issue’s Notable librarians section features the late Dr Josip Stipanov, a former long-time member of the Library’s staff and its 2002-2007 Director General.

In 2020, the Library lost one of its greatest friends and collaborators, the Fellow of the Croatian Academy of Sciences and Arts Tonko Maroević. Wishing to express at least some of our gratitude and appreciation for the many things Maroević has done with and for the Library, we have dedicated to him a special article, the first in the newly launched section of the journal, Homage.

As is the tradition, the issue closes with an overview of the Library’s events throughout the last year and its latest publications.

Read our stories, learn more about the library community in Croatia, and beyond, and in case you have any suggestions or comments, feel free to send them at glas@nsk.hr. 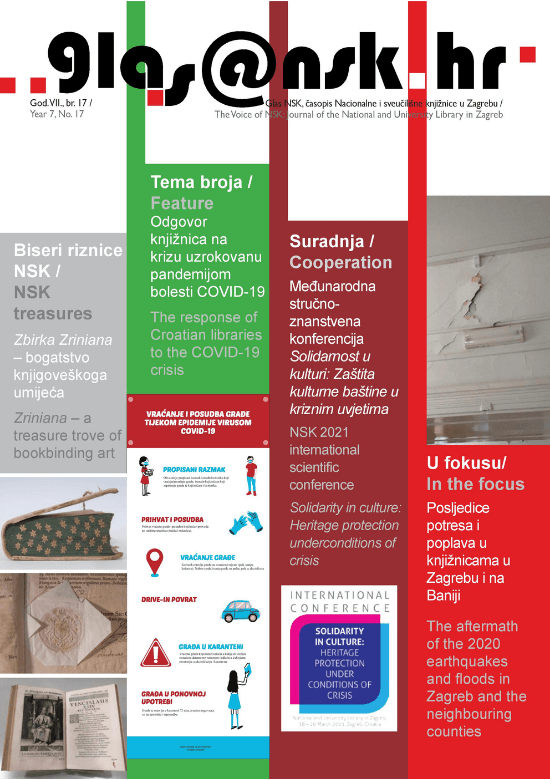