On 5 May 2022, the National and University Library in Zagreb (NSK) hosted a programme presenting its latest publication, a monograph on the history of Croatia’s first public library (Povijest prve javne knjižnice na hrvatskome tlu (1463.), knjižnica samostana sv. Dominika u Dubrovniku u okviru humanističkih gibanja u XV. i XVI. stoljeću) authored by historian, Dominican and corresponding member of the Croatian Academy of Sciences and Arts Professor Stjepan Krasić. Edited by Senior Public Relations Adviser at the NSK Marketing and Communications Section Nela Marasović, the monograph was published with the support of the Croatian Ministry of Culture and Media, Ministry of Science and Education and Adris Foundation. 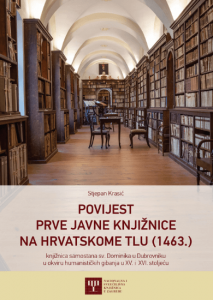 Revealing important and until now completely unknown details of Croatian cultural history, the monograph brings the results of Professor Krasić’s several years of research into the history of Croatia’s first public library, which according to all available resources is the Library of the Monastery of St. Dominic in Dubrovnik, established in 1463 as the third such library in Europe. Focusing on the library’s evolvement against the background of humanist developments in the 15th and 16th centuries, the monograph’s more than 400 pages also bring a detailed and interesting historical overview of the development of books and libraries, with particular emphasis in this context on the Croatian regions. Professor Krasić’s valuable research provides a brand-new perspective on the role of books and libraries in the cultural transformation of society, especially when it comes to Croatia.

The monograph’s presentation, moderated by the distinguished Croatian stage and film actor Dragan Despot, opened with an introductory address by NSK Director General Dr Ivanka Stričević, after whom the monograph was presented by the author, Professor Krasić, and Professor at the Department of Information and Communication Sciences of the Zagreb Faculty of Humanities and Social Sciences and Head of the Department’s Book and Publishing Section Ivana Hebrang Grgić.

In presenting his theories and the results of his research, Professor Krasić took the most extensive approach to his theme, stating a multitude of data and intriguing details, which will awaken interest not only among us librarians and historians, but among all those with professional or personal interest in issues related to culture. I am therefore convinced that this book, exploring the history of Croatia’s first public library, will frequently be a source of reference among Croatian library users, including the users of the National and University Library in Zagreb, which provides its services to the large student population of the Zagreb university, but also to researchers in search of reliable sources, pointed out NSK Director General Dr Stričević.

Apart from his distinctive approach to Croatian cultural history, the author emphasised what he termed “the small great city phenomenon”, referring by it to Dubrovnik, which, as Professor Krasić said, credited itself and humankind with disproportionately more than it could have been expected with regard to its physical size. Driven by his interest not only in mere dry facts surrounding the establishment of particular libraries, but in the role of books throughout history as universal and irreplaceable vehicles of knowledge and as such powerful educational and transformational instruments, Professor Krasić especially focused on the periods of humanism and the Renaissance, as a time, as someone said, when owing to books the European human finally discovered himself and the world around him, with one of his eyes looking back, towards classical antiquity, and the other looking forward, towards the future ahead of him.

This book brings much more than what you expect of it at first sight – it brings a systematic overview not only of the development of books and libraries, but of the entire social, cultural, political and scientific context of that development until the modern age. Drawing on an amazing amount of published and archival sources, the author explains all historical and social preconditions that led to the emergence of libraries, the focus of his interest, said Professor Ivana Hebrang Grgić. Hebrang Grgić also pointed out that the monograph may be useful reading material not only for those interested in libraries but to all who study history, art history, even architecture and other areas. Stjepan Krasić is a true “Renaissance man” and only such a person could have written a book as comprehensive as this one.

Stjepan Krasić (b. 1938, Čitluk, Bosnia and Herzegovina) studied in Dubrovnik, Zagreb and Rome, obtaining two doctorates, in theology and history. For full 35 years he taught history and research methodology at the Pontifical University of St. Thomas Aquinas in Rome and as an academic worked in a number of official capacities in several countries, including Croatia. After returning to Croatia in 2008, Krasić taught history at Libertas International University in Dubrovnik. A member of various research and cultural associations and institutions in Croatia and abroad, such as the Croatian Academy of Sciences and Arts and International Academy of Technological Sciences, and the author of 32 books and nearly 300 scientific treatises, Krasić holds 20 awards which he has received from distinguished cultural and scientific institutions in Croatia and other countries. Along with four lifetime achievement awards, two accolades from the President of the Republic of Croatia particularly stand out: The Order of the Croatian Star with the effigy of Ruđer Bošković, which Krasić was awarded in 1998, for outstanding results in his research into the history of Croats, and The Order of the Croatian Star with the effigy of Marko Marulić, which he received in 2020, for outstanding contribution to research on and the preservation and promotion of Croatian cultural and spiritual heritage in the Republic of Croatia and abroad. Also worth singling out is the honorary doctorate Krasić was granted by the University of Zadar, in 2005, for outstanding achievement in the area of humanities, the field of history, specifically his contribution to research into more recent Croatian history, especially with regard to the higher education system in Croatia, in Zadar in particular.

Scientific research belongs among those areas of human intellectual activity which most contribute to combating ignorance, regardless of the type of ignorance involved. And there indeed is a plethora of such areas. Another one of them, still insufficiently researched, is the history of books and librarianship in the Croatian regions, which, as many other areas, hides many pleasant surprises, capable of changing our long-held beliefs, which we considered unquestionable facts. However, fortunately for us, reality sometimes plays a joke on us and proves us wrong. Catches us by surprise when perhaps we hope the least. 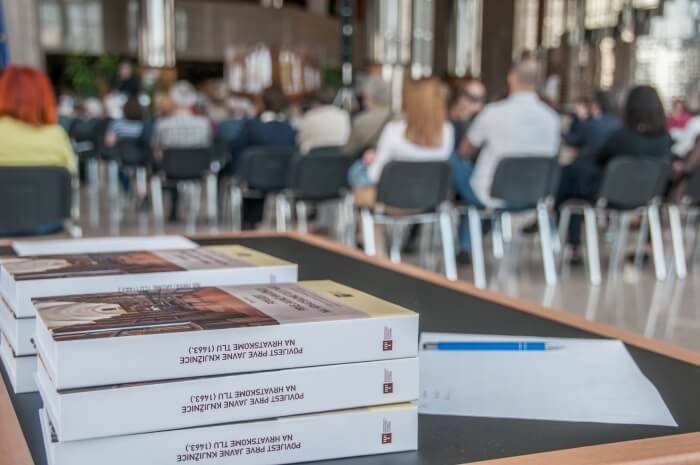