On 24 January 2019, the National and University Library in Zagreb (NSK) presented its monograph thematising Croatian Cyrillic heritage preserved in the Library’s Manuscripts and Old Books Collection (Album hrvatske ćirilice u Zbirci rukopisa i starih knjiga Nacionalne i sveučilišne knjižnice u Zagrebu). Authored by Dr Ivan Kosić, the monograph provides a historical overview of Croatian Cyrillic, one of three Croatian alphabets, and thoroughly describes manuscripts, letters and books of Croatian Cyrillic heritage preserved as part of the Library’s holdings.

The presentation opened with the introductory address by Director General of the National and University Library in Zagreb Tatijana Petrić, who expressed congratulations to the author, consulting editors and all others who took part in the monograph’s preparation.

“I am especially glad that, after marking the last year as the European Year of Cultural Heritage by programmes and initiatives promoting Croatian Glagolitic, we have stepped into the new year by paying tribute to Croatian Cyrillic, an equally fascinating element of our national and literary heritage. Before us is a valuable book whose almost 400 pages provides a detailed description of our 800-year journey in these regions, from 11th to 19th century. It also brings closer to us the most important works of Croatian Cyrillic preserved in the Library’s rare books collection, ranging from manuscripts and letters to printed books, documents, codices, rolls of arms, dictionaries, medical recipes, prayer books, even novels, and also statutes and miscellanies”, emphasised NSK Director General Petrić.

The monograph was then presented in greater detail by the Fellow of the Croatian Academy of Sciences and Arts Josip Bratulić, Senior Research Associate at the Old Church Slavonic Institute Marinka Šimić and Dr Ivan Kosić, the monograph’s author. While Fellow Bratulić especially emphasised the value of language and alphabet as signs of national identity as well as of the significance of treasuring them as such, Šimić presented the monograph’s content in greater detail and spoke about the history of Croatian Cyrillic as an important part of Croatian cultural heritage. “Out of three essential components making up Croatian written heritage, Croatian Cyrillic is the most neglected, so every initiative aimed at the preservation of this script represents a great contribution to our science. Published manuscripts from the Manuscripts and Old Books Collection of the National and University Library in Zagreb bear witness to the wealth of Croatian Cyrillic heritage and its wide use and presence in a wide variety of sources – from liturgical works, legal documents and registers, to medical recipes and letters”, said Šimić, also pointing out how the publication of this monograph will make Croatian Cyrillic heritage preserved in the Library’s collections considerably more available both to the wider public and researchers, who will find the comprehensive bibliography included in the monograph especially valuable. 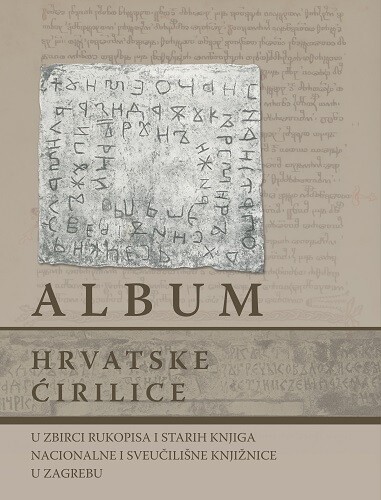