On 10 May 2022, the National and University Library in Zagreb (NSK) hosted the presentation of the Croatian translation, published in 2021 by the Ibis grafika publishing company, of a novel by Korean politician, novelist and librarian Young Shin set in Dubrovnik, a gem of Croatian cultural history, with references to the 1991-1995 Croatian Homeland War and other periods of Croatian history (Susret u Dubrovniku).

Organised as part of the National Library of Korea’s delegation’s visit to the National and University Library in Zagreb, the presentation opened with an introductory address by NSK Director General Dr Ivanka Stričević, after whom Ambassador of the Republic of Korea to the Republic of Croatia His Excellency Mr SUNG-WOOK HONG greeted the audience and Chief Executive of the National Library of Korea Ms SEO HYE-RAN expressed her and the delegation’s gratitude for the National and University Library in Zagreb’s hospitality and the opportunity to promote Mr Shin’s book.

In a subsequent address, the book’s author, Mr Shin, briefly presented his novel, also describing what motivated him to write it and the effort he put in into researching the history of Croatia and its surrounding region. He pointed out that his novel is the first Korean literary work drawing on Croatia’s history and heritage, with whose both natural and cultural aspects he expressed his genuine fascination. I am confident that over the next thirty years Croatia and Korea will become friends that will deepen their relations by promoting exchanges in various areas, such as diplomacy, economy, and culture, concluded Mr Shin.

The novel, translated into Croatian by Dr Ivana Gubić, focuses on the encounter of a former prosecutor of the International Criminal Tribunal for the former Yugoslavia and art historian, who came to Dubrovnik in search of her father. The two characters’ conversations and exchanges, occurring as part of the unfolding of their relationship during their journey through Croatia, Bosnia and Herzegovina and Montenegro, include numerous references to the actual events of the 1991-1995 Croatian Homeland War, but also to famous artists, statesmen and other historical figures, ranging from Titian and Napoleon to world-famous Croatian sculptor Ivan Meštrović and President of Yugoslavia Tito, details from whose lives have been fictionalised.

Exhibited as part of the presentation programme were also the photographs by distinguished Korean photographer HANMO YANG featuring traditional Korean motifs. Printed on 30-meter-long paper, the photographs have been proposed for inclusion in The Guinness Book of Records.

Dubrovnik, where Mr Shin’s book is set, known as the “Pearl of the Adriatic”, is a city in southeast Croatia boasting centuries-long maritime, mercantile and literary history. 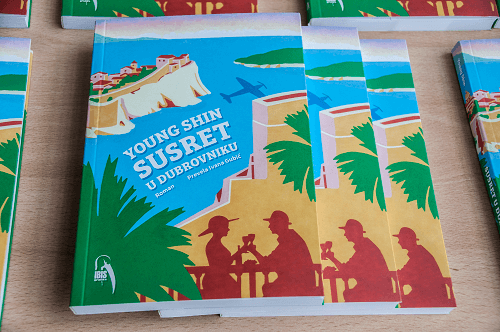 “Susret u Dubrovniku” (Zagreb: Ibis grafika, 2021), the Croatian translation by Dr Ivana Gubić of a novel by Korean politician, novelist and librarian Young Shin relying on Croatian heritage and history. National and University Library in Zagreb, 10 May 2022.