Gospel Duo consists of mezzo-soprano Ljiljana Šišeta-Vrbančić and pianist Oliver Vrbančić. After graduating from the Zagreb Academy of Music, the two artists were led by musical curiosity to the University of Music and Performing Arts Graz, where they studied jazz and today teach. The duo has been performing for a number of years, and their repertoire has been released by Croatia Records, the leading Croatian recording company.

The 2018 Hearts Together Make Music for Children concert was organised with the purpose of raising funds for the replenishment of the Zagreb Children’s Hospital library collection. Along with other eminent Croatian public figures, the concert attendees included Special Envoy of the Prime Minister of the Government of the Republic of Croatia State Secretary Tomislav Dulibić.

This humanitarian initiative has so far been supported by the publishing companies Naša djeca, Jesenski i Turk and Forum Zadar, as well as the Music Copyright Protection Department of the Croatian Composers’ Society and Croatian jazz musician, and bass guitar and double bass player Mario Mavrin. Media sponsorship for the concert was provided by the Croatian radio station Radio Marija.

Donations for the replenishment of the Zagreb Children’s Hospital library collection may be paid into the account of the National and University Library in Zagreb Foundation until the end of December 2018, with the payment purpose stated as “Srcem i glazbom za djecu”. 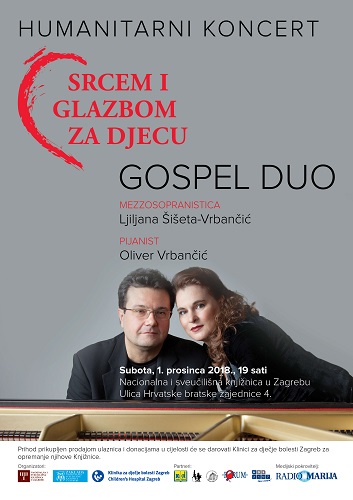