On 20 and 21 August 2019, the National and University Library in Zagreb (NSK) hosted IFLA CPDWL Satellite Meeting 2019, a special meeting of the Continuing Professional Development and Workplace Learning Section operating as part of the International Federation of Library Associations and Institutions (IFLA). The meeting was held as a preconference announcing this year’s IFLA World Library and Information Congress, IFLA WLIC 2019, and brought together some 160 participants from all across the globe.

The meeting’s programme, which was held under the theme Librarians and information professionals as (pro)motors of change: immersing, including and initiating digital transformation for smart societies, highlighted the role of librarians and information professionals in establishing smart societies as part of global digital transformation, and the impact of the related digital environment on their present and future professional skills.

The meeting was opened by the President of the Croatian Library Association and NSK Integrated Library System Adviser Dr Dijana Machala and Chair of the IFLA Continuing Professional Development and Workplace Learning Section Dr Gillian Hallam, owing to whose initiative the preconference was organised. Their welcome remarks were followed by a poster session featuring 15 poster presentations.

The preconference, held the next day, was also opened by Dr Machala and Dr Hallam, after whose introductory remarks followed a welcome remark by the Director General of the National and University Library in Zagreb Tatijana Petrić. The preconference programme included three invited lectures, 21 presentations and two workshops. The invited lectures were delivered by the Associate University Librarian for Technical and Access Services at Stanford University Dr Philip Schreur, Associate Professor at the Department of Comparative Literature and Librarianship at the University of Sarajevo Mario Hibert, and retired professor at the Osijek, Zagreb and Zadar universities and former Head of the Department of Information Sciences at the University of Zadar Tatjana Aparac-Jelušić. Other speakers at the preconference included librarians and information professionals from Australia, China, Croatia, Finland, France, Germany, Italy, Norway, Slovenia, Sweden, Turkey and the United States.

The programme of the Satellite Meeting, which focused on the presentation of experiences and best practice examples of librarians and information professionals, spotlighted the highlights of IFLA WLIC 2018 and the basic principles of IFLA Global Vision, according to which the purpose of digital society is to ensure equal and free access to information and knowledge for all, in which context librarians and information professionals should thoroughly analyse the ongoing process of global digital transformation, adopting the most in-depth and critical approach to changes in this context on the global level. Furthermore, and in compliance with the IFLA CPDWL mission, which focuses on all forms of professional development and training of librarians, the preconference programme highlighted education as a necessary precondition for gaining new competencies, and placed special emphasis on sharing professional experience and cooperative learning among the members of the professional community aimed at ensuring sustainability of libraries and all other institutions in the heritage sector, for the purpose of raising public awareness of important social issues and strengthening local communities.

The meeting participants also had the opportunity to learn more about the building, services and holdings of the National and University Library in Zagreb, as well as about its affiliated institutions, such as the Croatian State Archives, Zagreb City Libraries network, and the Library of the Croatian Academy of Sciences and Arts. The accompanying programme included the presentation of Croatia’s cultural heritage included on the UNESCO’s List of Intangible Cultural Heritage – klapa multipart singing, national Mediterranean dishes, gingerbread craft (licitar) and traditional manufacturing of children’s wooden toys. During two sightseeing tours, the meeting participants were shown the most attractive sights of Zagreb, the capital of Croatia, by a guide costumed as Marija Jurić Zagorka, the first female Croatian journalist and one of the most widely read Croatian writers. The meeting participants also had the opportunity to meet other distinguished figures who marked the history of Zagreb through a special programme with costumed actors during the preconference break.

IFLA CPDWL organised its Satellite Meeting 2019 in cooperation with the Croatian Library Association, National and University Library in Zagreb and the Zagreb City Libraries network.

The successfully organised IFLA CPDWL Satellite Meeting 2019 at the National and University Library in Zagreb which managed to bring together professionals from all around the world over the latest issues in the field of librarianship and information sciences shows the strength of the LIS community in Croatia and announces similar world-class conferences and conventions to come. 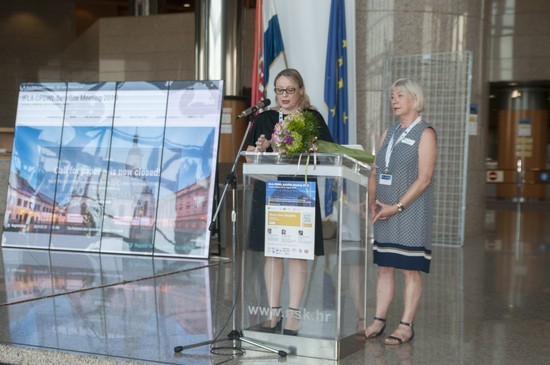