The National and University Library in Zagreb (NSK) is currently hosting Václav Havel: Antikódy, a special exhibition opened on 27 October 2016 as a way of marking the Czech Republic National Day, which is celebrated on 28 October.

Put on and organised through cooperation of the Embassy of the Czech Republic in Zagreb and Václav Havel Library, this exhibition highlights a selection of poems from Antikódy, a poetry collection by Václav Havel, the notable Czech politician, theatre critic, writer and playwright. The collection, which features Havel’s works of the so-called concrete poetry, was created as a side project from his prominent work as a playwright and represents a valuable part of the rich output of the 20th-century Czech experimental poetry. In 1964 its first completed version was turned down by a publisher Mladá fronta, and so far the collection’s most complete edition was published in 1999, where poems highlighted in this exhibition have been selected from.

Last time the Library presented Havel’s works was in November 2009 through the Library’s special edition Havel, a print-and-poetry portfolio published as part of the Biblioteka Pjesnik series which intertwined Havel’s poems with prints by a prominent Croatian visual artist Zdenka Pozaić.

Václav Havel, the last president of former Czechoslovakia and the first president of the Czech Republic, died in 2011 after making a personal history that strongly marked political developments and culture in his homeland, but in the entire Europe as well.

The exhibition will be on view until 7 November 2016. 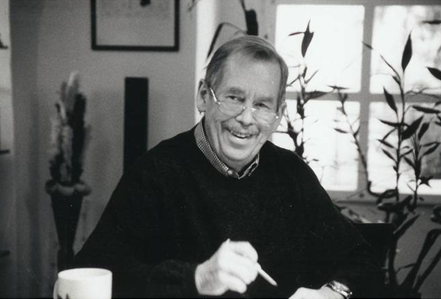