On 7 September 2022, starting at 12.00, the National and University Library in Zagreb (NSK) will host the opening of two exhibitions spotlighting the Czech presidency of the Council of the European Union and a nearly millennial bond between Croatia and the Czech Republic. The exhibitions are jointly organised by the Croatian-Czech Society and the Library and will be opened by the Ambassador Extraordinary and Plenipotentiary of the Czech Republic to the Republic of Croatia His Excellency Mr Milan Hovorka – one is a photographic exhibition, organised under the auspices of the Croatian news agency HINA, whose photo journalists authored a larger part of the photographs to be exhibited (Hrvatska i Češka 1992. – 2022. kroz fotografije), while the other exhibition features the print portfolios of a prominent Croatian painter, graphic artist and designer Zdenka Pozaić inspired by Czech poetry (Češka poezija u grafičkim mapama Zdenke Pozaić).

The author of the photographic exhibition is the President of the Croatian-Czech Society Marijan Lipovac, who selected photographs best portraying the depth and extent of the two countries’ relations in the past 30 years ranging from those documenting diplomatic visits, the countries’ cultural cooperation, support initiatives concerning their ethnic minorities and the Czech Republic’s assistance to Croatia in the dealing with the consequences of the 1991-1995 Croatian Homeland War to those related to tourist visits, the Czech Republic’s investments in Croatia and encounters between Czech and Croatian football supporters. The selection will thus feature the most prominent figures in the two countries cultural relations such as Dušan Karpatský, Jiří Menzel, Michal Viewegh, Zlatko Stahuljak, Vlado Milunić and Miro Gavran. 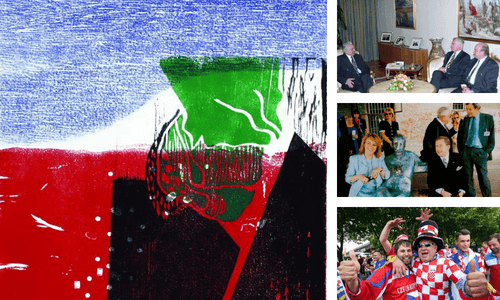