The National and University Library in Zagreb will be hosting Burnum – The Archaeological Treasures of Krka, a special exhibition featuring the treasures of Burnum, an archaeological site located in the Krka National Park (Burnum – arheološko blago Krke). The exhibition, which the Library is organising together with the Krka National Park and Drniš City Museum, will be open from 7 to 24 June 2016.

The exhibition will give an overview presenting research undertaken on the archaeological site Burnum from the beginning of the 20th century to the present day, highlighting original artefacts discovered at the site such as weapons, tools, jewellery and objects for everyday use, as well as a rich selection of Burnum-related scientific papers, monographs and articles held in the collections of the National and University Library in Zagreb.

Among a wide variety of valuable objects and relicts, exhibition visitors will be able to see a glass bead showing a Gorgon (1st c. AD, Syria/Lebanon), cylinder-shaped seal made of ivory which was used for sealing the documents of the Roman Eleventh Legion, denarius of Marcus Antonius (32/33 BC), etc.

This significant archaeological locality will be presented by the Fellow of the Croatian Academy of Sciences and Arts Nenad Cambj and Professor Marin Zaninović, who will also present the English edition of a monograph on the Burnum collection published by the Krka National Park and Drniš City Museum, The Burnum Archaeological Collection.

The exhibition has been organised as part of the Green Library for Green Croatia project, which the Library has launched with the purpose of heightening awareness among its users, especially students, of various issues related to the protection and preservation of nature and perceiving Croatia’s natural resources as a significant element of its overall heritage. 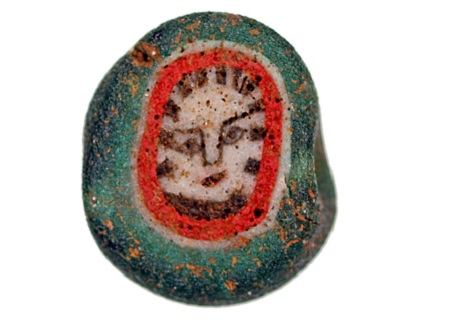