Apart from being one of the organisers of Book Night 2016, the National and University Library in Zagreb also hosted its symbolic opening ceremony, which was held in the Library’s grand lobby on 22 April at 12.00 with the representatives of the Croatian Ministry of Culture, City of Zagreb, Croatian publishing companies, librarians, members of the Book Night organising committee and other book enthusiasts.

The opening ceremony started with the screening of a short film aimed at the promotion of reading and filmed by the Antitalent production company.

Then Dubravka Đurić Nemec, Head of Directorate for Literature, Publishing and Libraries at the Croatian Ministry of Culture, gave a brief address highlighting the significance of Book Night and the growing number of institutions, organisations and individuals taking part in it. Director General of the National and University Library in Zagreb Tatijana Petrić also briefly addressed everyone present, presenting Book Night in the context of many other efforts that the Library devotes to the promotion of books and reading.

Nenad Bartolčić, President of the Knjižni blok – Inicijativa za knjigu pro-book association, spoke on behalf of the Book Night Organising Committee and pinpointed a synergy between all the partakers in the chain(s) of the creation, production, management, and content distribution of books as the crucial factor for the success of the Book Night programme. He also emphasised the necessity of developing the national strategy on the fostering of a strong reading culture and creating productive creative industries policies.

The Book Night opening programme also included the presentation of the results of the latest survey of Croatia’s book market conducted by the GfK market research agency. Research results were presented by Tamara Kraus, who demonstrated that data indicating the number of read and purchased books have remained the same in relation to the previous year – the majority of 46% of Croatian citizens who have read at least one book during the last year read fiction titles; 53% of them regularly borrow titles from libraries, while every fifth citizen has bought at least one book during the year – most often in a bookstore, second most often at a newsstand. Taken together with the fact that only 1% of Croatia’s citizens buy e-books, all other numbers obtained through this research are still below the European standard.

Isabella Mauro, Coordinator on the Shots to Read project, which Book Night organisers ran during previous three years in cooperation with Zagreb-based photography club Fotoklub Zagreb, presented the Shots to Read – A Retrospective (2013 – 2015) exhibition. These previous exhibitions successfully promoted books, reading and photography in more than 30 exhibition venues, mostly libraries, and by means of a planned donation of exhibition photographs to many Croatian institutions this valuable social project will go on.

The often serious issues of books and reading were also given a refreshing musical dimension through the lively performance of the Zagreb City Libraries Band.

Book Night programme is closely related to the marking of World Book and Copyright Day and the Library connected the two by organising and hosting an International Public Reading event. It included the representatives of the embassies of Chile, USA, France and Poland, students of the Faculty of Humanities and Social Sciences of the University of Zagreb, representatives of Zagreb-based Croaticum – Centre for Croatian as Foreign and Second Language, staff members of the National and University Library in Zagreb and other participants. Selected texts were read in a truly wide array of world languages, both ancient and contemporary – Portuguese, Hindi, Polish, German, Spanish, French, Dutch, Slovak, Czech, English, Japanese, Chinese, Turkish, Latin, Old Greek and Old Church Slavonic.

Another public reading programme, entitled Zagreb librarians marking Book Night 2016 and organised by the Library and Zagreb Library Association, was held with the participation of professional and private library lovers, who read selected texts featuring themes related to books and libraries. 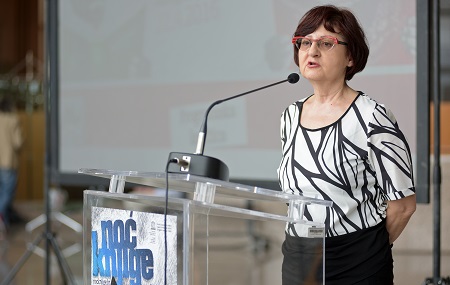 Dubravka Đurić Nemec, Head of Directorate for Literature, Publishing and Libraries at the Croatian Ministry of Culture, at the opening of Book Night 2016. Photograph: Nina Đurđević.