The National and University Library in Zagreb has long recognised the most efficient mechanisms in the context of the achievement of its vision, and it accordingly has a vital role as the central Croatian library. Apart from successfully responding to the requirements of its many users, its role in the supervision, development and integration of all Croatia’s libraries makes it a crucial link in a chain whose high level of professionalism has resulted in a well-organised and effective national library system, whose position, as well as that of the library profession, is one of the major priorities in the context of the advancement of Croatian culture and its strategic positioning in terms of Croatia’s overall development, said Prime Minister Plenković, particularly emphasising the Library’s significance in Croatia’s cultural and academic sphere, the preservation and better promotion of Croatia’s national heritage and its increased presence in everyday life.

In her presentation, NSK Director General Dr Ivanka Stričević gave an overview of the Library’s achievements in 2020, a year predominantly marked by challenges brought about the COVID-19 epidemic, and announced the Library’s new strategic era.

We will keep making efforts in using worthwhile projects to bring together libraries and all those who can contribute to the humanisation of our society and wellbeing of our citizens. We, the staff of the National and University Library in Zagreb, have set joint objectives, and, even more importantly, formulated basic principles and identified dominant values we are guided by and which we are making part of the Library’s 2021-26 strategy. They are excellence, innovation and creativity, authenticity and reliability, openness and cooperativeness, and professionalism and ethics, based on which we will keep developing the Library’s activity in the future, pointed out Director General Stričević.

The celebration programme also included the presentation of the 2020 National and University Library in Zagreb Award, which is annually given in three categories – to legal entities, distinguished library professionals and the Library’s employees. Awarded as the Library’s employee was Senior Conservator at the Library’s Preservation and Storage Department Darko Čižmek, while Dr Ljiljana Sabljak was awarded as a longstanding and prominent library professional. The NSK Award for legal entities was presented to Dr Zoran Bekić, the Director of the University of Zagreb Computing Centre (Srce), for the Centre’s long and successful cooperation with the Library in the development of national information and digital library systems.

A special NSK Award was this year presented to the National and University Library in Zagreb Emergency Centre, whose members, apart from the Library’s Director General Stričević, are Sandi Antonac, Mirjana Draženović Angelovski, Sandra Đurica, Miro Grgić, Tomislav Horvatin, Tatjana Marincel Borković, Dr Marko Orešković, Igor Palašti, Gordana Radočaj, Tomislav Tomašić and Suzana Ulipi, each of which contributed to the success of the many activities of the Centre, whose establishment on 13 March 2020 was prompted by the need to bring the Library’s activities and its entire operating regime in line with circumstances brought about by the COVID-19 epidemic and later, following the devastating earthquakes that hit Zagreb and central Croatia, with special earthquake safety measures.

This year’s NSK Day celebration, held in the presence of a limited audience owing to the current circumstances related to the COVID-19 epidemic, was for the first time livestreamed on the Library’s Facebook page. The audience included prominent figures from Croatia’s political and academic circles such as the Croatian Minister of Culture and Media Nina Obuljen Koržinek, Croatian Minister of Science and Education Radovan Fuchs, Vice-Chancellor of the University of Zagreb Dr Damir Boras and other distinguished guests. The programme also featured the video greetings of the directors of several national libraries.

The National and University Library in Zagreb Day is marked in memory of 22 February 1483, the day of the printing of a masterpiece of the Glagolitic tradition and the first book in the Croatian language, a missal entitled Misal po zakonu rimskoga dvora. 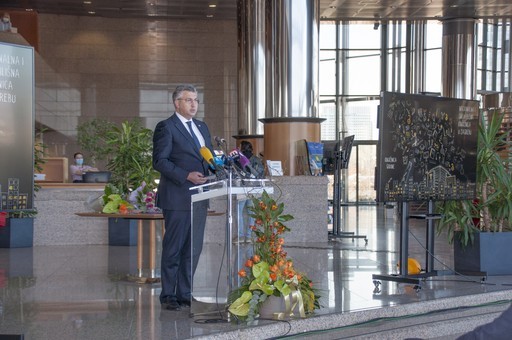 The Prime Minister of the Government of the Republic of Croatia Andrej Plenković at the celebration of the National and University Library in Zagreb Day 2021.