On 21 February 2020, at the Croatian State Archives, the National and University Library in Zagreb, currently acting as the seat of Croatia’s presidency of the Council of the European Union, organised a special programme marking the anniversary of the Library’s founding, the National and University Library in Zagreb Day. The programme, commemorating the date of the printing of the first book in the Croatian language and the first in Europe not in the Latin alphabet, Misal po zakonu rimskoga dvora, brought together many prominent figures from Croatia’s public life and its cultural and academic circles.

In a subsequent address, Director General of the National and University Library in Zagreb Dr Ivanka Stričević presented the Library’s achievements during 2019, which apart from successful projects, special programmes and events aimed at the popularisation of reading, conferences, symposia and exhibitions in Croatia and abroad, also included the Library’s central role in defining regulations and standards for all types of libraries introduced as part of the new Croatian Library Act, which came into force in 2019. Dr Stričević further emphasised the Library’s many projects run in response to the requirements of today’s digital age, such as its specialised web portals, mobile applications, its digital laboratory – NSK DigiLab, etc. Following her expressions of gratitude for support and cooperation to the Government of the Republic of Croatia, Croatian Ministry of Culture, Ministry of Science and Education and Ministry of Foreign and European Affairs, Dr Stričević also thanked the Library’s partners, the entire library community and, particularly, the Library’s staff, who she encouraged to be proud for being able to make their contribution to the Library’s activity and thus become part of its history and future.

The 2020 NSK Day celebration programme also included the announcement of the winners of the 2019 National and University Library in Zagreb Award, which is annually presented in three categories – to legal entities, distinguished library professionals and the Library’s employees – for outstanding contributions to the development of the library profession in Croatia. The awards were presented by the NSK Library Adviser and member of the 2019 NSK Award Committee Alisa Martek – awarded as the Library’s employee was Sonja Martinović, Dr Mikica Maštrović was awarded as a longstanding and prominent library professional, while the University of Zagreb received the award as a legal entity. 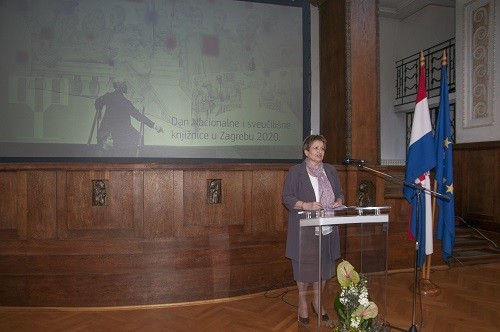