On 11 February 2022, one volume of the 1761, second edition of Dizionario geografico portatile by a Swiss geographer Isaak Bruckner (1686-1762), misappropriated from the National and University Library in Zagreb as part of the infamous 1980s thefts, was returned to the Library to be reincluded in its collections.

The valuable book was presented to the Director General of the National and University Library in Zagreb Dr Ivanka Stričević by the Croatian Minister of Culture and Media Dr Nina Obuljen Koržinek and Ambassador Extraordinary and Plenipotentiary of the Republic of Croatia to the Italian Republic Jasen Mesić.

The two-volume Dizionario was published in Venice, in a renowned printing house Remondini. It brings the alphabetical list of then known geographical entities of the world accompanied by brief descriptions for each entity of its location, administrative affiliation and other related details. The returned, second volume lists entities under L – ZW, while the first volume, including entities listed under A – KY, is still missing.

Based on the Library’s records, it was positively established that the discovered book – classified as a cultural good owing to its being printed prior to 1850 – had been part of the Library’s collections.

As a result of the notorious 1982-87 thefts from the Library, committed by a trio led by Aleksandar Milles, its collections were robbed of more than 1,650 books, prints, maps, illustrations and other types of material. Although some of these treasures have been restored to the Library, the greater part of that invaluable heritage is still being looked for.

Most recently returned items include Trinum magicum sive Secretorum magicorum opus continens, a rare and valuable copy of a 1614 work by Cesare Longino which was restored to the Library’s collections in November 2020, and Selenographia, sive Lunae descriptio, a copy of a famous 17th-century work by Jan Heweliusz (Johannes Hevelius), which was reincluded among the Library’s holdings in July 2019. 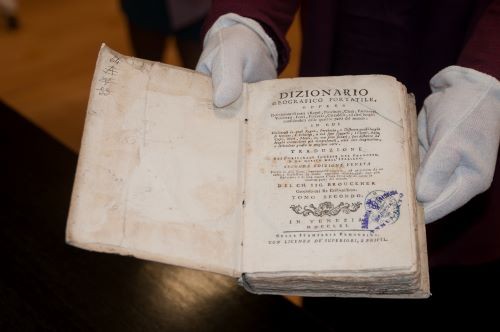 The second volume of the misappropriated two-volume “Dizionario geografico portatile” (1761, Venice) by a Swiss geographer Isaak Bruckner restored to the Library’s collections after more than thirty years. National and University Library in Zagreb, 11 February 2022.