Trinum magicum sive Secretorum magicorum opus continens, a rare and valuable copy of a 1614 work by Cesare Longino which was misappropriated from the National and University Library in Zagreb in 1987, has been restored to the Library’s collections.

The recovered book was returned to the Library on 17 November 2020, and is now part of the Library’s Manuscripts and Old Books Collection, from which it was stolen in the first place. The book was presented to the Director General of the National and University Library in Zagreb Dr Ivanka Stričević by Ambassador Extraordinary and Plenipotentiary of the Republic of Croatia to the Italian Republic Jasen Mesić. Present at the return ceremony were also the Croatian Minister of Culture and Media Dr Nina Obuljen Koržinek, Head of the Library’s Manuscripts and Old Books Collection Dr Irena Galić Bešker and Head of the NSK Marketing and Communications Section Sandi Antonac.

The book’s return is a result of many years of successful cooperation between the National and University Library in Zagreb and Croatian Ministry of Culture and Media, the work of the Embassy of the Republic of Croatia in the Italian Republic, as well as the joint efforts of the Croatian and Italian police forces. It comes a little more than a year after the return of Selenographia, sive Lunae descriptio, a copy of a famous 1647 century work by Jan Heweliusz (Johannes Hevelius), containing one of the earliest detailed maps of the Moon’s surface.

In July 2020, the Embassy of the Republic of Croatia in the Italian Republic sent to the Library the photographs of the discovered book. Based on the comparison between the received photographs and the Library’s stock books, the Library positively established that the discovered book had been part of its collections, and that prior to 1912, as indicated by the book’s initial shelfmark. Also, the stamp on the back of its front cover gives grounds for the conclusion that it was donated to the Library by the Friedrich Schiller University in Jena, Germany. It was subsequently allocated a numerus currens shelfmark, 33.729, under which it was stolen in 1987 and included in the Library’s list of misappropriated titles in 1988.

The notorious 1982-87 thefts from the National and University Library in Zagreb robbed its collections of more than 1,650 books, prints, maps, illustrations and other types of material. With only several stolen items restored to the Library so far, the greater part of that invaluable heritage, misappropriated by a trio led by Aleksandar Milles, is still being looked for. 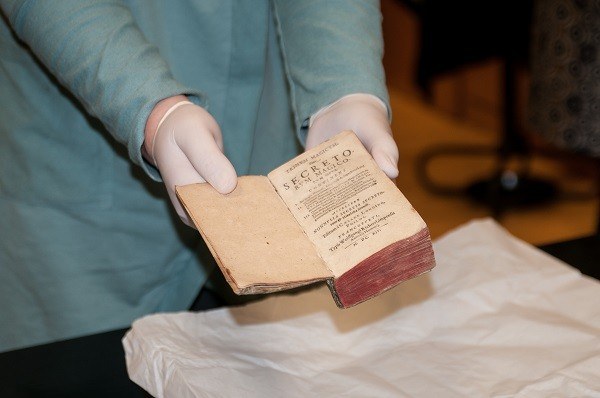 “Trinum magicum sive Secretorum magicorum opus continens”, a rare and valuable copy of a 17th-century work, has been restored to the Library’s collections on 17 November 2020.