After being put on at the Martynas Mažvydas National Library of Lithuania, Šiauliai County Povilas Višinskis Public Library, Klaipėda County leva Simonaitytė Public Library and Kaunas County Public Library, the Marko Marulić – A European Humanist (Markas Maruličius – Europos humanistas) exhibition opened at the Panevėžys County Gabrielė Petkevičaitė-Bitė Public Library on 16 September 2020. Jointly organised by the National and University Library in Zagreb (NSK) and the Embassy of the Republic of Croatia in the Republic of Lithuania, as part of NSK programme spotlighting rich and varied Croatian cultural heritage during Croatia’s 2020 presidency of the Council of the European Union, the exhibition will remain on view until 10 October 2020.

The exhibition opening programme included addresses by the Director of the Panevėžys County Gabrielė Petkevičaitė-Bitė Public Library Jurgita Bugailiškienė, Mayor of Panevėžys Rytis Mykolas Račkauskas and Ambassador of the Republic of Croatia in the Republic of Lithuania Krešimir Kedmenec, who all emphasised the importance of literacy for the preservation of national cultures, heritage and identities.

Its organisation is supported by the Croatian Ministry of Culture and Media, while the partners of the exhibition are Književni krug Split, a cultural and publishing association of the intellectuals of Split, and Dr Bratislav Lučin, Head of MARVLIANVM, a Split-based research centre focusing on Marko Marulić’s heritage, whose findings and texts make the exhibition’s backbone.

The exhibition’s 12 display boards, with texts in Lithuanian and English, feature a representative selection of works by Marko Marulić (1450-1524), “the father of Croatian literature” and “the Croatian Dante”, preserved at the National and University Library in Zagreb, mostly as part of its Manuscripts and Old Books Collection. It offers insight into Marulić’s most widely read works, which went through many editions and got translated in several languages within several decades after their publication. The exhibition’s dynamic content also gives an overview of the examples of Marulić’s influence on distinguished European figures of that time and presents varied content on Marulić included in world encyclopaedias, lexicons, catalogues, bibliographies and reference works in the field of literature and history, as additional evidence of Marulić’s international significance. Marulić’s oeuvre is also presented in relation to the work of his prominent contemporaries, among which Martynas Mažvydas, the author and editor of the first book printed in the Lithuanian language, particularly stands out.

The exhibition is accompanied by a special catalogue, intended to serve as the lasting reminder of the cooperation that the exhibition was prepared as a result of and of many connections between Croatia and Lithuania in terms of history and cultural legacy, an invaluable foundation for future collaboration between the two countries within the European Union and beyond. 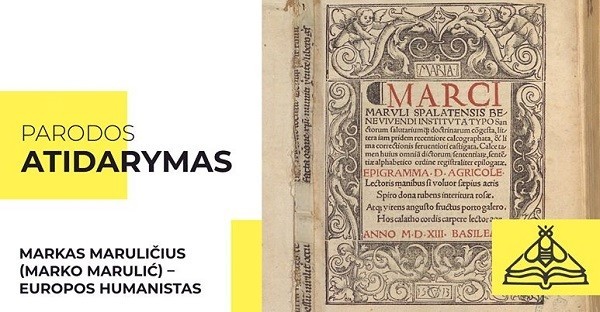