On 3 December 2021, the National and University Library in Zagreb (NSK) put on the Marko Marulić – A European Humanist / Marko Marulić – ein europäischer Humanist exhibition at the Solothurn Central Library (ZBS), in Switzerland. Prepared as a result of cooperation between the two libraries, the organisation of the exhibition also included the Embassy of the Republic of Croatia in the Swiss Confederation. The exhibition is spotlighting the legacy of Marko Marulić (1450-1524), often termed as “the father of Croatian literature” and “the Croatian Dante”, whose work brought together the influences and content making up European identity and earned Marulić wide recognition in the context of European cultural heritage.

The exhibition’s opening programme included addresses by the Director of the Solothurn Central Library Dr Yvonne Leimgruber, Ambassador Extraordinary and Plenipotentiary of the Republic of Croatia in the Swiss Confederation Dr Andrea Bekić and Director General of the National and University Library in Zagreb Dr Ivanka Stričević, who also presented the exhibition. The Head of ZBS Special Collections Ian Holt presented Marulić’s works preserved as part of the holdings of the Solothurn Central Library, while the Deputy Head of the Department of Classical Philology of the University of Zagreb and Acting Chair of Greek Language and Literature Section at the Zagreb University Professor Neven Jovanović delivered a lecture on Marulić’s life and work.

The organisation of the exhibition commenced at the end of 2019, as part of the preparations for the 2020 Croatia’s presidency of the Council of the European Union, which the National and University Library in Zagreb, acting as the seat of the presidency, recognised as a valuable opportunity for presenting to the international public the greatest treasures of Croatian national heritage, as well as some of the most significant figures in Croatia’s history. Thus, in 2020, the rich and significant oeuvre of Marko Marulić was presented through a tour of this exhibition all across Lithuania, while its tour originally scheduled to take place the same year in Switzerland had to be postponed due to circumstances related to the COVID-19 pandemic.

The year 2021 however is particularly suited to the exhibition’s Swiss tour since it marks the 500th anniversary of the of the printing of Judita (1521), the first epic in the Croatian language and Marulić’s most significant work, the two copies of whose 1522 edition are preserved at the Manuscripts and Old Books Collection of the National and University Library in Zagreb.

Apart from his being fundamentally relevant to Croatian literature, Marko Marulić is equally significant in the context of European cultural heritage – his works were published in the major book-printing centres of the turn of the 16th century, translated in many world languages and are today included in all relevant library catalogues, reference works and bibliographies. Along with being the most notable Croatian writer of that period, Marulić was a humanist whose work reached far beyond literature and whose religious and moral writings in Latin brought him fame in the cultural circles of both Europe and the rest of the world.

The exhibition’s 13 display boards, with texts in German and English, feature a representative selection of Marulić’s works preserved at the National and University Library in Zagreb. It offers insight into his most widely read works, which went through many editions and got translated in several languages within several decades after their publication. The exhibition’s dynamic content also gives an overview of the examples of Marulić’s influence on distinguished European figures of his time and presents varied content on Marulić included in world encyclopaedias, lexicons, catalogues, bibliographies and reference works in the field of literature and history, as additional evidence of Marulić’s international significance.

Marulić’s oeuvre is also presented against the background of cultural and economic circumstances present in Split, his native city, at the time of Marulić’s life. Also, the exhibition presents 113 Marulić’s works included in various library and other types of collections in Switzerland and brings details surrounding their publication. Marulić’s legacy is additionally presented in relation to the work of notable Croats in the history of Switzerland, among which Ivan Stojković (1390-1443), theologian and humanist who left behind the largest humanist library not only in Switzerland but anywhere north of the Alps, particularly stands out.

Apart from the display boards, the exhibition also features four out of eight works by Marulić preserved in the collections of the Solothurn Central Library.

The exhibition was organised with the support of the Croatian Ministry of Culture and Media, while its content is entirely based on the research findings and texts by Dr Bratislav Lučin, Head of MARVLIANVM, a Split-based research centre focusing on Marko Marulić’s heritage.

The exhibition, which will be put on in several Swiss cities, with the emphasis on those whose libraries hold Marulić’s works, is accompanied by a special catalogue, intended to serve as the lasting reminder of the exhibition and the connections between Croatia and Switzerland that it highlights, in terms of history, culture and heritage. 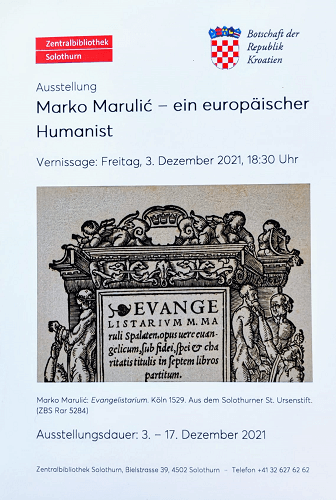