Marking the 500th anniversary of the printing of “Judita”, the cornerstone of Croatian literature

Judita, or Istoria sfete udovice Judit u versih harvacchi slozena (“The History of the Holy Widow Judith Composed in Croatian Verses”), the 1521 Croatian epic, the first in the Croatian language and as such the cornerstone of Croatian literature, earned its author Marko Marulić (1450-1524) the designation of “the father of Croatian literature”, as well as that of “the Croatian Dante”. The central figure of the Split humanist circle, Marulić was also one of the most notable European humanists of the Renaissance.

Judita is an epic in six cantos written in Chakavian – along Shtokavian and Kajkavian one of three major dialects of the Croatian language – thematising the bravery of Judita (Judith), who saved her people, the residents of the Jewish city of Betulija (Bethulia), from the Assyrian general Holoferno (Holofernes). Rendering this biblical story in a unique verse characteristic of Croatian cultural space, a twelve-syllable verse with a double rhyme, and additionally using a characteristic cross rhyme, Marulić poignantly addressed the conditions of his age, marked by fear and uncertainty of the people of Split, Marulić’s native town, facing the threat of the Ottoman invasion. Judita’s complex and demanding versification scheme reflects all the skill and agility of Marulić’s poetic talent, which enabled him to combine the conventions of the humanistic poetry with those characteristic of Petrarch.

Marulić completed Judita in 1501, saw it published twenty years later, on 13 August 2021, and lived to see its three subsequent editions. One of only two still existing copies of the original edition is preserved at the ‘Little Brothers’ Library’ (Knjižnice Male braće) in Dubrovnik, while the other is held as part of the Paravia family library, today part of the holdings of the Zadar Research Library. A copy of the 1522 edition, containing nine woodcuts featuring battle scenes, is preserved at the Manuscripts and Old Books Collections of the National and University Library in Zagreb.

Marulić is one of the most translated Croatian writers of all time. Owing to his skilful adaptation in Judita of the biblical theme and motifs in the Croatian vernacular, its significance far surpasses the bounds of Croatian literature and represents a relevant work of the European Renaissance, owing to which it has been translated into English, Hungarian, Italian, French, Lithuanian, and partially into Slovenian, Spanish and German.

Apart from Croatian, Marulić also wrote in Italian, but during his life his most popular works were in Latin. His De institutione bene vivendi per exempla sanctorum (Venice, 1506), offering guidance for a virtuous life through the examples from the lives of saints, was a hugely popular title of the 16th century and it went through some 60 editions in many European languages: Italian (Venice, 1563), German (Cologne, 1563), Portuguese (Lisbon, 1579), French (Douai, 1585), Czech (Prague, 1621). Francis Xavier brought it with him on his famous missionary journey as the only book apart from a breviary and catechism.

Marulić’s other significant works include Evangelistarium (Venice, 1516), Quinquaginta parabolae (Venice, around 1510), De humilitate et gloria Christi (Venice, 1519), Epistola … ad Adrianum VI. (1522), De laudibus Herculis (Venice, 1524), Davidias (Zagreb, 1954), etc. In 1995, until then unknown verses in Latin by Marulić, in which he appears as a poet of both love and satire, were discovered at the University of Glasgow Library (Glasgowski stihovi (Glasgow verses), Zagreb, 1999).

As a way of marking the 500th anniversary of the printing of Judita, the Croatian Parliament declared the year 2021 The Year of Marko Marulić.

Learn more about the work and life of this titan of Croatian culture as part of a special online exhibition of the National and University Library in Zagreb. 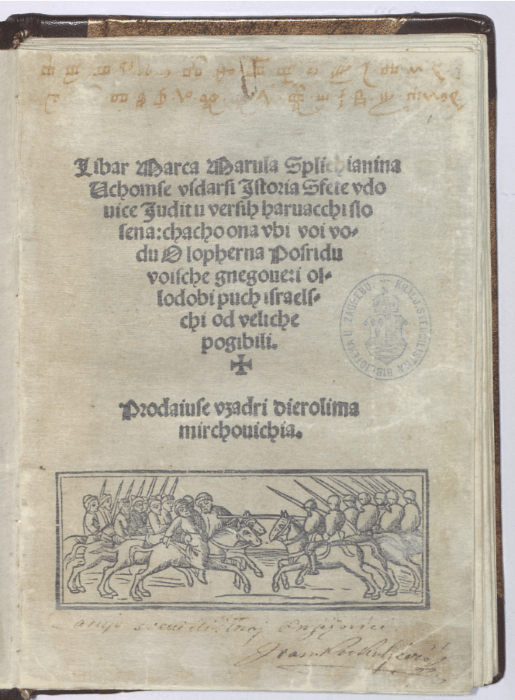