Latest NSK exhibition: “Drawings by Hugo Conrad von Hötzendorf in the Print Collection of the National and University Library in Zagreb”

Drawings by Hugo von Hötzendorf in the Print Collection of the National and University Library in Zagreb, the latest NSK exhibition opened on 5 October at the Library’s Print Collection and will be on view until 20 October 2017.

The exhibition was opened by Head of the NSK Print Collection Tamara Ilić Olujić, and Vesna Vlašić Jurić, member of the Collection and the author of the exhibition, presented the displayed drawings and the work of Hugo von Hötzendorf, a 19th-century Croatian painter of German descent.

The displayed works date from a period following von Hötzendorf’s return from his studies in Vienna in 1840 and could be classified in two groups, the first of which show sketches of people, horses and trees and among which one can easily discern the artist’s particular interest in detailed presentation of horse anatomy.

The drawings in the other group show various landscape motifs, mainly from the Croatian region Slavonia, but also from other Croatian regions and regions of Slovenia and Austria that von Hötzendorf travelled through. Creating a serene, but melancholic atmosphere, von Hötzendorf leads us through meadows encircled by mountains and hills, with the remains and ruins of old forts and castles scattered down their slopes. He takes us through the forests of Slavonia, by the old cottages leaning against crumbling trees and wooden fences stretching between pastures, revealing the beauty of the sources of mighty rivers or far-away roads winding into the distance.

The appearance of Hugo Conrad von Hötzendorf on the 1830s cultural and art scene of Osijek brought the city’s visual art to a new level.

There are not many known and reliable data on the birth, childhood, and even youth of von Hötzendorf. Even his date of birth is doubtable, but it has been established with certainty that he got his first drawing lessons from his father. His life and work may be reconstructed to some extent based on his drawings. Von Hötzendorf’s earliest sketches bearing witness to his artistic interests and sensibility were made between 1828 and 1829 on a journey through Srijem, a region in eastern Croatia. These earliest works show von Hötzendorf’s fascination with motifs from natural surroundings and places he travels through which will remain his source of inspiration for the rest of his life as an artist.

Von Hötzendorf took over the management of Osijek’s City Drawing School in January 1841 and continued working in this position throughout the rest of his life. Apart from running this school, in 1867 he opened a private one. He was a skilled and inspiring teacher and an outstanding painter which contributed to both schools’ professional reputation and attracted a large number of students, among which there were also Adolf Waldinger and Iso Kršnjavi. 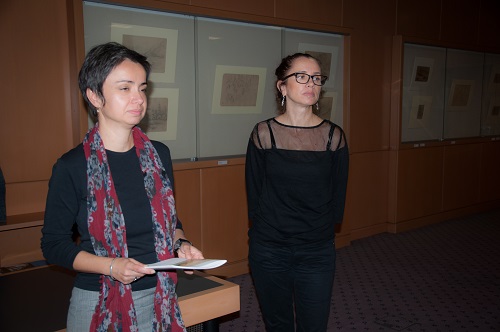 Head of the NSK Print Collection Tamara Ilić Olujić and author of the exhibition Vesna Vlašić Jurić at the opening of the NSK exhibition featuring drawings by Hugo Conrad von Hötzendorf in the Collection.