From 17 to 20 May 2022, the National and University Library in Zagreb will be hosting Kliofest 2022, the ninth Croatian history festival, which will open in the Library’s grand lobby on 17 May 2022, starting at 10:45, and will be live streamed on the Kliofest YouTube channel.

The festival, named after Clio, the patron of history from Greek mythology and the Muse that inspired poets writing heroic epics, has several purposes – to bring closer to its visitors and the general public history as a scientific discipline and its creators, popularise publishing in the field of historiography and affiliated sciences, encourage debate among historians on relevant professional issues and bring into focus their place and status in general in present-day Croatian society.

The four-day programme of this year’s Kliofest brings plenty of roundtables dealing with a wide range of themes from history, book launches, open forums, five exhibitions and an accompanying book fair, many of whose titles will be available to the visitors at lower prices.  The roundtables will be addressing issues ranging from historians as researchers and the methods that they use in their work, through Croatian historiography between traditional and modern tendencies and microhistory, to relations between China and southeast Europe and, of course, the globally present and relevant topic that has gripped the world’s attention since February 2022 – Russian aggression against Ukraine. Also, the roundtable themes will include research into the history of central Europe, history of Slovenes, diaries and records by women between wars, etc.

Some fifty Croatian publishers will present their publications in the field of history and affiliated sciences and offer them at affordable prices. Books that will be presented as part of the festival’s programme will bring into spotlight a great variety of themes from both Croatian and European history, e.g. the history of Croats in Hungary, controversial issues from Yugoslavia’s history, Croatia’s medieval period, the current status of the population of Croats in Vojvodina, Serbia, etc. This part of the Kliofest 2022 programme will also include the presentation of The End of Ottoman Rule in Bosnia. Conflicting Agencies and Imperial Appropriations (Abingdon, New York: Routledge, 2022) by Professor of Southeast European History at Humboldt University in Berlin Hannes Grandits. 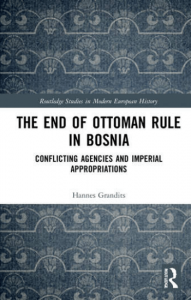 Participants in the festival will include many notable historians from Croatia, Austria, Bosnia and Herzegovina, Bulgaria, China, Germany, Hungary, Slovenia, Serbia and Ukraine.

Learn more about the programme of Kliofest 2022 (Croatian text only).