On 19 October 2021, the National and University Library in Zagreb hosted the opening of Judita, an exhibition that the Library organised with the support of the Croatian Ministry of Culture and Media as part of the Ministry’s Year of Reading 2021 national campaign as a way of marking a half a millennium of the printing of the 1521 Croatian epic, the first in the Croatian language and as such the cornerstone of Croatian literature, which earned its author Marko Marulić (1450-1524) the designation of “the father of Croatian literature” as well as that of “the Croatian Dante”, and significantly contributed to his inclusion among the most notable European humanists of the Renaissance.

Judita, or Istoria sfete udovice Judit u versih harvacchi slozena (“The History of the Holy Widow Judith Composed in Croatian Verses”), is an epic in six cantos written in Chakavian – along Shtokavian and Kajkavian, one of three major dialects of the Croatian language – thematising the bravery of Judita (Judith), who saved her people, the residents of the Jewish city of Betulija (Bethulia), from the Assyrian general Holoferno (Holofernes). Rendering this biblical story in a unique verse characteristic of Croatian cultural space, a twelve-syllable verse with a double rhyme, and additionally using a characteristic cross rhyme, Marulić poignantly addressed the conditions of his age, marked by fear and uncertainty of the people of Split, Marulić’s native town, facing the threat of the Ottoman invasion. Judita’s complex and demanding versification scheme reflects all the skill and agility of Marulić’s poetic talent, which enabled him to combine the conventions of the humanistic poetry with those characteristic of Petrarch.

The exhibition, which will remain on view until 2 November 2021, was opened by the Director General of the National and University Library in Zagreb Dr Ivanka Stričević and the Envoy of the Government of the Republic of Croatia and State Secretary at the Croatian Ministry of Culture and Media Dr Ivica Poljičak. The epochal epic and other works by Marulić preserved in the Library’s Manuscripts and Old Books Collection were presented by the Head of the Collection Dr Irena Galić Bešker, while the Senior Public Relations Adviser at the NSK Marketing and Communications Section and the exhibition’s author Nela Marasović presented the concept of the exhibition.

Apart from the monumentally relevant Judita, the exhibition’s 15 display boards feature a representative selection of other works by Marulić preserved by the Library and thus offer a wider perspective on the great writer’s life and work. The focus of the exhibition are several copies of Judita that the Library holds – two copies of the 1522 edition and copies of Judita’s fourth and fifth editions. The displayed Library’s treasures also include works inspired by Judita in the NSK Music Collection and NSK Map Collection.

The exhibition visitors may also see the digitised versions of Marulić’s works available as part of the Library’s Digital Collections web portal and learn more about Marulić and his oeuvre through the Library’s Marko Marulić virtual exhibition, created with the support of the Croatian Ministry of Culture and Media as part of the 2018 project aimed at the digitisation of Marulić’s works (Digitalna zbirka djela Marka Marulića).

The exhibition was organised on the initiative of Književni krug Split, a cultural and publishing association of the intellectuals of Split, and Dr Bratislav Lučin, Head of MARVLIANVM, a Split-based research centre focusing on Marko Marulić’s heritage, whose research findings and texts make the backbone of the exhibition. 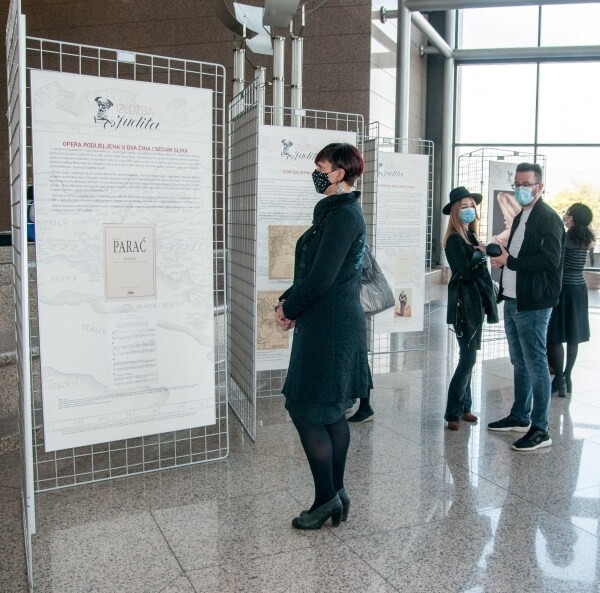 “Judita”, NSK exhibition marking the 500th anniversary of the printing of the first epic poem in the Croatian language. National and University Library in Zagreb, 19 October – 2 November 2021.