In memory of Hanibal Lucić

Today we commemorate the greatest writer of the Croatian Renaissance poetry Hanibal Lucić, the author of the verses of probably one of the most beautiful poems in the entire Croatian poetry. This prominent Croatian lyrist and playwright originated from one of the most distinguished Croatian noble families. He was born in 1485 in Hvar on the homonymous Croatian island. We know that he performed important state and administrative duties in his native region, but apart from that little is known about him since there are not many preserved records about his life. We can gather from his literary works that he was exceptionally well-acquainted with classical literature, Croatian Glagolitic and oral tradition and the contemporary Italian and Croatian writing of his time.

He destroyed a larger part of his writings in a fit of self-criticism, and his surviving writings were published in Venice in 1556 (Skladanja izvarsnih pisan razlicih) owing to his son’s efforts. They included 22 love poems, the play Robinja (The Slave Girl), several poetical epistles, two epitaphs and the translation of Ovid’s Heroides.

In his poetry Lucić celebrated love for the woman and female beauty. In their aesthetic quality, Lucić’s poems represent a true masterpiece of Croatian renaissance lyric poetry. He describes beauty and love in the tradition of Petrarch, at the same time drawing on the oral tradition of Croatian love poetry. Among these love poems is Jur nijedna na svit vila, a poem of exquisite words symmetrically structured in octosyllabic octaves that Lucić devoted to the beauty of his beloved one. By entreating God to save her beauty from old age and decay, the poet indirectly expressed his artistic self-confidence in being sure that this beauty will be immortalized owing to the undying value of his literary creation.

Lucić’s play The Slave Girl (Robinja) was the first secular play in the Croatian language. It was written as a dramatic epic poem with intertwined contemporary and historical themes and a plot characterized by the simplicity of the folk tradition which reveals its possible origin. It consists of three acts written in twelve-syllable verse characterized by double rhyme.

Influenced by the spirit of the Renaissance, not far from his native town some time around 1530 Lucić started building his summer residence, which surpassed other island edifices by its unique structure. There he spent the final years of his creative and spiritual life. He died in Hvar on 14 December 1553 and was buried in the family vault in the Franciscan church of St. Mary located below the main altar.

His verses, poetic translations, epistles, and especially the play Robinja (The Slave Girl) make a small but significant and indispensable part of the literary heritage of the European Renaissance. A special cultural programme entitled Sonetni dani Hanibala Lucića, initiated by the writer Veljko Barbieri in Lucić’s honor, also keeps alive our awareness of the value of the literary work by this outstanding author of the Croatian Renaissance. 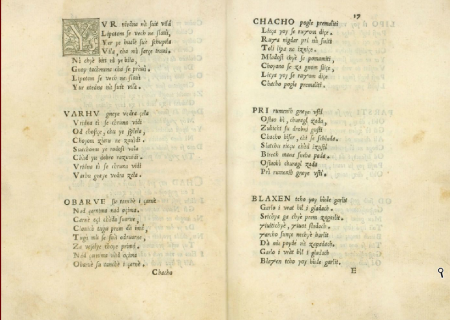