“Fiofest 2021”: Celebrating maestro Dinko Fio as part of Year of Reading 2021, with songs and digitally

On 28 October 2021, as part of the 2021 Croatian Book Month programme, taking place within the Year of Reading 2021 national programme run by the Croatian Ministry of Culture and Media, the National and University Library in Zagreb hosted the 2021 Fiofest concert, marking the 10th anniversary of the death of Dinko Fio, Croatia’s notable 20th-century folk song collector, composer, conductor and music educator, and presented the Library’s digital collection bringing together works by and about Fio (Digitalna zbirka maestra Dinka Fija „Maestro moj“). Attending the concert programme as an Envoy of the Croatian Minister of Culture and Media was Nataša Jovičić.

Maestro Fio, who died on 2 November 2011, donated his legacy to the Library’s Music Collection, which he frequently, and gladly, visited throughout his life. The concert programme included the presentation of Fio’s works in the Maestro moj digital collection, which also includes additional material and resources presenting Fio’s legacy in greater detail. Authored by the Head of the Collection Dr Tatjana Mihalić and the member of the Collection staff Marina Stanić Palašti and with invaluable professional assistance of Dr Joško Ćaleta, from the Institute of Ethnology and Folklore Research, the digital collection, which rounds up maestro Fio’s story, not only from the perspective of his accomplishments as a composer, but also regarding his influence on klapa singing and the development of its sound, performing style and interpretation, is available as part of the Library’s NSK Digital Collections web portal and via the StoryMap application.

This year’s, altogether third edition of Fiofest was the fourth concert that the National and University Library in Zagreb organised as an homage to the great maestro, the value of whose work for the preservation of Croatia’s musical heritage is truly immense. The concert’s inclusion in the 2021 Croatian Book Month programme was based on Fio’s rather extensive work on setting to music a significant number of poems by Croatian writers, such as Vladimir Nazor, Lucija Rudan, Tatjana Radovanović, Pere Ljubić, Ivo Cetinić and others.

Special form of support to the organisation of Fiofest 2021 was provided by the Poliklinika Breyer polyclinic in Zagreb, which enabled the testing of the concert performers for COVID-19 at lower prices and thus made its valuable contribution to the promotion of klapa singing and maestro Fio’s oeuvre during the pandemic.

In the words of Dr Ćaleta, Dinko Fio was a musician by birth and expert by education, (…) never dull or strict to the detriment of his oeuvre. Quite the contrary, he is pronouncedly playful, unusually full of life, occasionally even carried away by his own enthusiasm, but nevertheless always sufficiently clear, as expressive as it is required, sometimes in the shadow of the traditional, but still present to the extent to which he is able to use that same tradition as the basis for developing his own unique and recognisable musical, as well as artistic, expression. 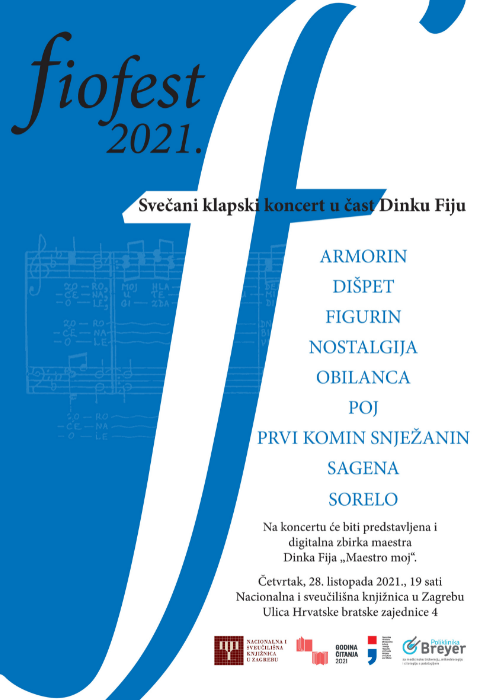