Faust Vrančić in the context of European heritage, an exhibition spotlighting the invaluable legacy of the famous Croatian polymath, lexicographer and inventor at the turn of the 17th century, will be put on at Macquarie University in Sydney, Australia. The exhibition, which in 2018 was hosted by the Hungarian Academy in Rome, will open on 19 September 2019, the first day of the conference entitled Croatia and Croatians in past and present networks, which will be taking place until 22 September.

The exhibition was organised as a result of the initiative of Dr Marijana Borić, Research Associate at the Institute for the History and Philosophy of Science of the Croatian Academy of Sciences and Arts, through cooperation between the National and University Library in Zagreb, Macquarie University and the University’s Croatian Studies Foundation.

The exhibition’s 16 display boards vividly present Vrančić’s work and his significant contribution to scientific, cultural and religious heritage of Europe 400 years after his death. The boards are illustrated by the digitised images of Vrančić’s most important works preserved as part of the Manuscripts and Old Books Collection of the National and University Library in Zagreb, Dictionarium quinque nobilissimarum Europae linguarum, Latinae, Italicae, Germanicae, Dalmaticae et Ungaricae (Venice, 1595) and Machinae novae (Venice, 1515/16). Other resources from the Library’s holdings featured as part of the exhibition include Vrančić’s manuscript legacy, preserved as part of the same Library’s collection, digitised resources held by the Library’s Print and Map Collections, as well as the digitised copies of resources from several major European heritage institutions.

As a man of great learning who was highly accomplished in several scientific fields, Vrančić truly embodied the Renaissance man, being a proper homo universalis in every sense of the concept. He spent the greater part of his life in the Croatian-Hungarian kingdom, Habsburg Monarchy, Republic of Venice and the Papal States, also acting as a diplomat and bishop. Through his works, aimed at the spiritual unification of Europe of his time, Vrančić transcended the boundaries of his national identity, leaving behind a rich legacy whose lasting contribution to the development of Europe’s scientific, cultural and religious heritage has the same unifying potential for today’s Europe. 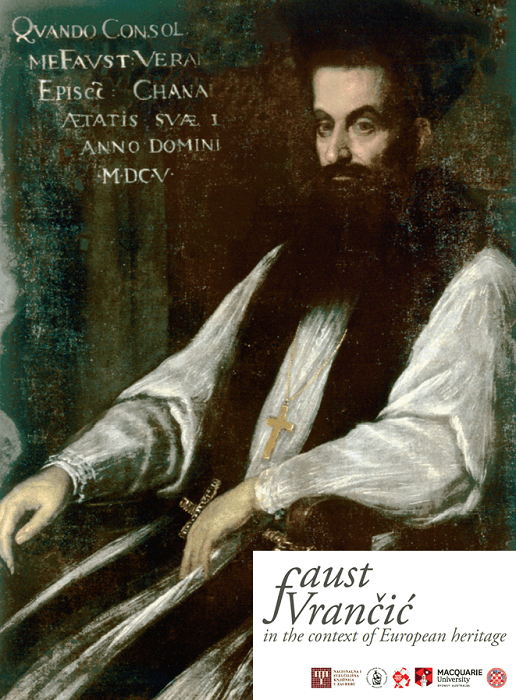 “Faust Vrančić in the context of European heritage”, opening on 19 September 2019 at Macquarie University, Sydney, Australia.

“Faust Vrančić in the context of European heritage”, opening on 19 September 2019 at Macquarie University, Sydney, Australia.