From 2 to 16 December 2021, the National and University Library in Zagreb is presenting an exhibition featuring works by children created as part of TRACE (Traditional children’s stories for a common future), an international Erasmus+ project focusing on the popularisation of children’s literature.

Worth €178,330.00, TRACE, which ran from 1 September 2018 to 31 July 2021, was coordinated by the National and University Library in Zagreb, and its project partners were Petit Philosophy association (Zadar, Croatia), Josip Pupačić Primary School (Omiš, Croatia), University of the Peloponnese (Trípolis, Greece), Creative Ideas association (Riga, Latvia) and Euro-Arab Foundation for Higher Studies (Granada, Spain).

The project targeted teachers, educational workers and librarians working with children between the ages of 6 and 12 with the aim of getting them acquainted with traditional children’s stories from the partner countries, and thus also with these countries’ cultures.

Altogether 20 traditional children’s stories were selected in cooperation with prominent education and ICT professionals and translated into English language in order to present to a wider audience the cultural heritage of Croatia, Greece, Latvia and Spain, as well as to help these countries’ young generations to exchange and thus keep alive that valuable legacy.

By country, the selected stories, available on the project’s e-platform, were:

Croatia:
The Black Ram
Red Rocks
Don’t Bump into a Tree nor Hit the Stone
Manda’s Well
The Story of the Plitvice Lakes
Froggy Girl

Greece:
Icarus & Daedalus Wings
The Man, the Boy and the Donkey
Theseus and the Minotaur

Latvia:
Wild Animals and the Dough Box Maker
The Bee Is Punished for Lying
The Little Bread Bun
The Old Man’s Mitten
The Grateful Creatures
Golden Egg
The Star Tram

Spain:
The Monk and the Weasel
The Traveller and the Goldsmith
The Caliph, the Shepherd and Happiness
How to Teach an Elephant to Speak.

The teachers and librarians included in numerous workshops organised as part of the project were acquainted with creative and innovative methods of using traditional children’s stories, as a valuable part of European cultural heritage, to encourage reading, critical thinking, the development of communication and social skills, promotion of moral values and research of one’s own culture among children in the targeted age group whose genuine little works of art, inspired by the selected stories, the exhibition is highlighting. 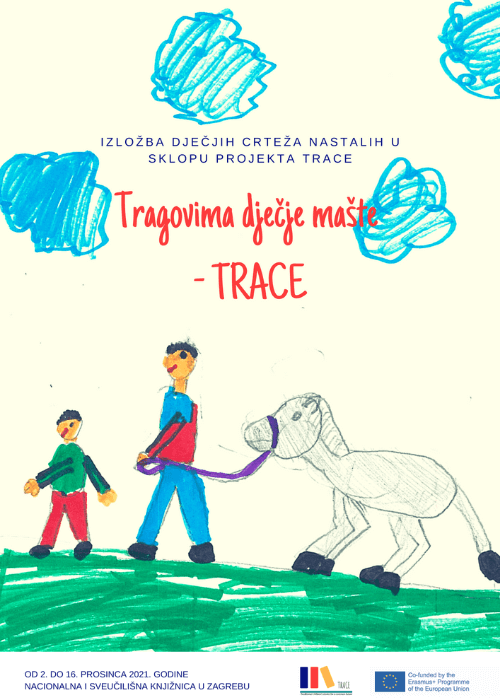