On 17 November 2021, the National and University Library in Zagreb (NSK) hosted the opening of an exhibition featuring works by Croatian contemporary artists thematising the 30th anniversary of the suffering of Vukovar in the 1991-1995 Croatian Homeland War (Žrtva Vukovara 1991. u suvremenoj umjetnosti). The exhibition, which is organised by the Croatian Ministry of Veterans’ Affairs and Croatian Association of Artists, will remain on view until 30 November 2021.

Apart from the Prime Minister of the Government of the Republic of Croatia Andrej Plenković, who opened the exhibition, the opening programme, which was moderated by the Director of the Croatian Association of Artists Ivana Andabaka, included addresses by the Director General of the National and University Library in Zagreb Dr Ivanka Stričević and Chairman of the Association’s Executive Board and Dean of the Zagreb Academy of Fine Arts Professor Tomislav Buntak.

The exhibition spotlights four works of art selected as part of an international art competition (Žrtva Vukovara 1991.) organised with the aim of including contemporary artists’ contribution in collective memory associated with the 1991 suffering of Vukovar. Presented to the public for the first time, they bring together through their theme four out of a wide range of contemporary art forms – painting, interactive light and sound installation, sculpture and photography. The exhibition thus features A-létheia, a light and sound installation by Ida Blažičko and Alex Brajković, Fragmenti, a monochrome abstract composition by Stjepan Šandrk, Vukovar in situ, a polyptych by Vjeran Hrpka, and Slušatelj, a sculptural installation by Vladimir Novak.

Since 4 November, the Library is hosting another exhibition commemorating the 30th anniversary of the battle of Vukovar (Sloboda se njegovim imenom zove), which the Library co-organised with the Večernji list daily in partnership with the Kliofest association and Vukovar City Library and which will also remain on view until 30 November.

These two exhibitions, which so ideally complement each other by presenting the image of Vukovar and its suffering from different perspectives, featuring material ranging from testimonies about the battle of Vukovar and Vukovar’s culture to works conveying the artistic impression of the fate that befell it in 1991, are a vivid proof of the significance of Vukovar for Croatian national identity, emphasised NSK Director General Dr Stričević, inviting everyone to visit both exhibitions.

Photographs by: Croatian Association of Artists. 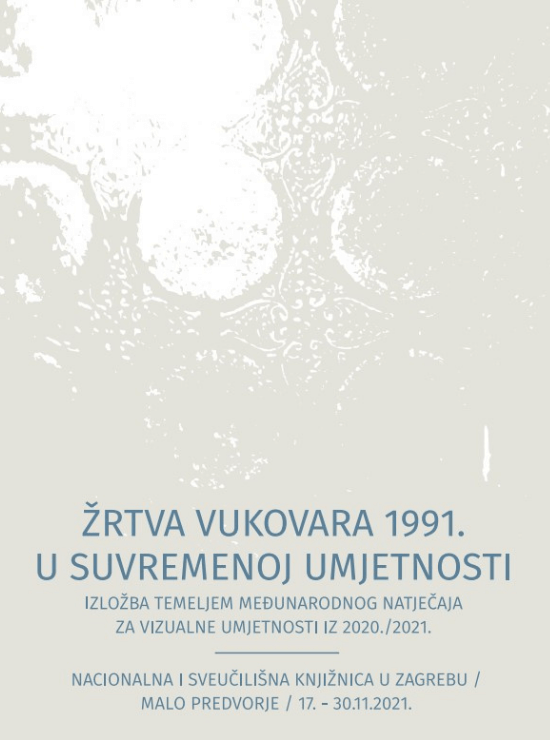 NSK hosting the exhibition commemorating the 30th anniversary of the suffering of Vukovar in the 1991-1995 Croatian Homeland War through contemporary art (“Žrtva Vukovara 1991. u suvremenoj umjetnosti”). National and University Library in Zagreb, 17 – 30 November 2021.