On 4 November 2021, the National and University Library in Zagreb (NSK) hosted the opening of an exhibition marking the 30th anniversary of the battle of Vukovar, the most bitter armed conflict of the 1991-1995 Croatian Homeland War as well as the most brutal and longest battle on Europe’s territory since the Second World War (Sloboda se njegovim imenom zove). The exhibition, which the Library co-organised with the Večernji list daily in partnership with the Kliofest association and Vukovar City Library, is held under the auspices of the Government of the Republic of Croatia and with the support of the Croatian Ministry of Culture and Media, as part of the Ministry’s Year of Reading 2021 national programme.

The exhibition’s opening programme included addresses by the Prime Minister of the Government of the Republic of Croatia Andrej Plenković, Director General of the National and University Library in Zagreb Dr Ivanka Stričević, editor-in-chief of Večernji list Dražen Klarić, one of the exhibition’s authors and Head of the Homeland War Book Collection of the National and University Library in Zagreb Hrvoje Špac, the exhibition curator, author of texts of the exhibition and member of the Kliofest association Vlatka Filipčić Maligec, Director of Vukovar City Library Jelena Miškić and one of the exhibition’s authors and Public Relations Adviser at the NSK Marketing and Communications Section Maja Priselac, who also moderated the programme. The opening also included a reading by Croatian stage and screen actor Joško Ševo of selected passages from a notable work capturing the spirit of Vukovar (Dunav: P.S. 1991. Vukovarske razglednice) by Pavao Pavličić, Croatian contemporary writer, Professor Emeritus at the Zagreb Faculty of Humanities and Social Sciences, Fellow of the Croatian Academy of Sciences and Arts and last but not least – a native of Vukovar. Attending the programme as the representatives of the Government of the Republic of Croatia were the Croatian Minister of Culture and Media Dr Nina Obuljen Koržinek, Croatian Defence Minister Dr Mario Banožić and Envoy of the Speaker of the Croatian Parliament and Chairperson of the Parliament’s Education, Science and Culture Committee Dr Vesna Bedeković.

With this exhibition, the National and University Library in Zagreb and its partners wish to pay tribute to Vukovar, a heroic city, and make their contribution to marking the 30th anniversary of its suffering in the Croatian Homeland War. Through the exhibition’s preparation, which took an entire year, we wished to give insight into the events of 1991 and present resources documenting the fate of the city and its people during the most difficult period of their history. However, even more than that we wanted this exhibition to offer hope, by portraying Vukovar’s endurance and its determination to overcome its painful past. Thus, apart from resources in the Library’s Homeland War Book Collection, the exhibition features varied treasures in other Library’s collections, ranging from old prints, postcards and maps to literary works and manuscript music, bearing witness to Vukovar’s unbreakable will to go on, said the exhibition’s main author, National Library Affairs Assistant to the Director General of the National and University Library in Zagreb Dr Sofija Klarin Zadravec.

The exhibition features a rich selection of photographs, manuscripts, newspaper articles and other material in the collections of the National and University Library in Zagreb and the partner institutions preserving the memory of the suffering of Vukovar and events surrounding its three-month siege in 1991, but also presenting this unique city’s centuries-long cultural tradition.

Texts by historian Filipčić Maligec, the exhibition curator, provide insight into the circumstances of the battle, especially those related to events at the Vukovar hospital, the site of the horrible Ovčara massacre, which followed after Vukovar’s capture, as well as in nearby Borovo Selo. They are accompanied by the photographs of Croatian photojournalists (Damir Radnić, Davorin Višnjić, Drago Havranek, Emica Elveđi Goran Pichler, Igor Kralj, Josip Bistrović, Marko Mrkonjić, Mišo Lišanin, Robert Belošević, Robert Šipek and Siniša Hančić) and the Večernji list frontpages documenting conditions in wartime Vukovar and its tragedy in the Croatian Homeland War.

A representative selection of books thematising wartime Vukovar from the Library’s Homeland War Book Collection displayed at the exhibition is part of currently more than 3,000 titles included in the Collection, bringing in one place and making available all relevant resources on the Croatian Homeland War. Apart from books published in Croatia, by Croatian authors and in the Croatian language, the Collection includes non-book material and titles published all around the world, on various media, by authors from a wide range of countries, in many different languages – thematising, occasioned or inspired by the Croatian Homeland War.

Apart from books on Vukovar, works by Vukovar authors, prints and old postcards featuring Vukovar’s most notable landmarks and vistas and Vukovar-related music manuscripts and maps from the Library’s Print Collection, Music Collection, Manuscripts and Old Books Collection and Map Collection, the exhibition programme also includes the presentation of a digital collection thematising Vukovar (Vukovar) and online exhibition presenting Vukovar’s culture (Kultura u Vukovaru danas), both created by Vukovar City Library, in cooperation with the National and University Library in Zagreb.

The exhibition will remain on view until 30 November 2021. 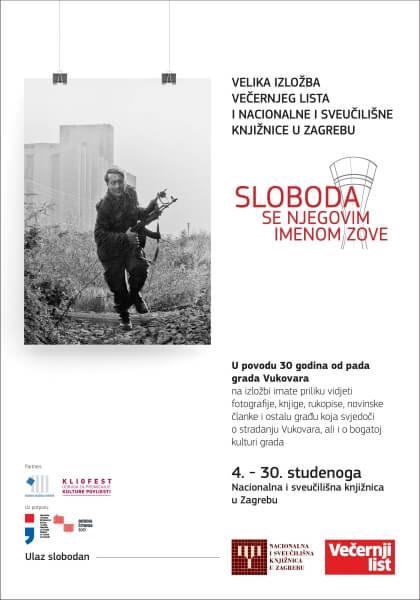 NSK hosting the exhibition commemorating the 30th anniversary of the battle of Vukovar, the most bitter armed conflict of the 1991-1995 Croatian Homeland War and the most brutal and longest battle on Europe’s territory since the Second World War (“Sloboda se njegovim imenom zove”). National and University Library in Zagreb, 4 – 30 November 2021.