In 2015, Mr. Penavić, a notable Croatian benefactor and all-around philanthropist, generously donated to the NSK Print Collection 37 posters by Mirko Ilić, owing to which the number of works by this internationally recognised author in the Collection rose to 55. This exceptionally valuable donation was made by Mr. Penavić’s Aliis Inserviendo Consumor Foundation, or AIC Foundation, whose activities have been aimed at the promotion of Croatian and American culture ever since its establishment in New York in 2008.

Over the last four decades of his in every way outstandingly distinguished work, Mirko Ilić (b. 1956), a tremendously creative and prolific illustrator, graphic designer and comic strip artist, received acknowledgement from all major arts and cultural institutions in the world. He started his career in Zagreb and soon acquired iconic status in the entire region of former Yugoslavia as the founder of a progressive group of comic strip artists Novi kvadrat (The New Square) and illustrator and comic strip artist for a hugely popular avant-garde youth paper Polet, weekly news magazine Danas and biweekly Start. He went on to confirm his talent in Spain, France and Italy, and in 1986 left for the United States, where his arresting and thought-provoking illustrations quickly started to be published in major US newspapers and magazines such as Time, The New York Times, The New York Times Book Review, The Wall Street Journal, The Washington Post, etc.

The donated posters, dating from 1987 to the present day, address the widest possible range of themes and social issues and were commissioned by a variety of both US and Croatian clients (e.g. Museum of Modern and Contemporary Art in Rijeka (Croatia), the Croatian daily Slobodna Dalmacija, AIGA – The American Institute of Graphic Arts, MTV Networks, Hollywood Foreign Press Association, etc.). Some of the posters have been dedicated to the promotion of Croatian culture in the United States, such as those that Ilić made for the US tour of the renowned Croatian National Folk Dance Ensemble Lado and US concerts of prominent Croatian jazz musicians Boško Petrović and Matija Dedić.

The exhibition will be presented by the donator Krešimir Penavić, author of the exhibition Charlotte Frank and Head of the NSK Print Collection Tamara Ilić Olujić.

The exhibition will remain on view until 8 May 2017. Make sure you see it, by all means. 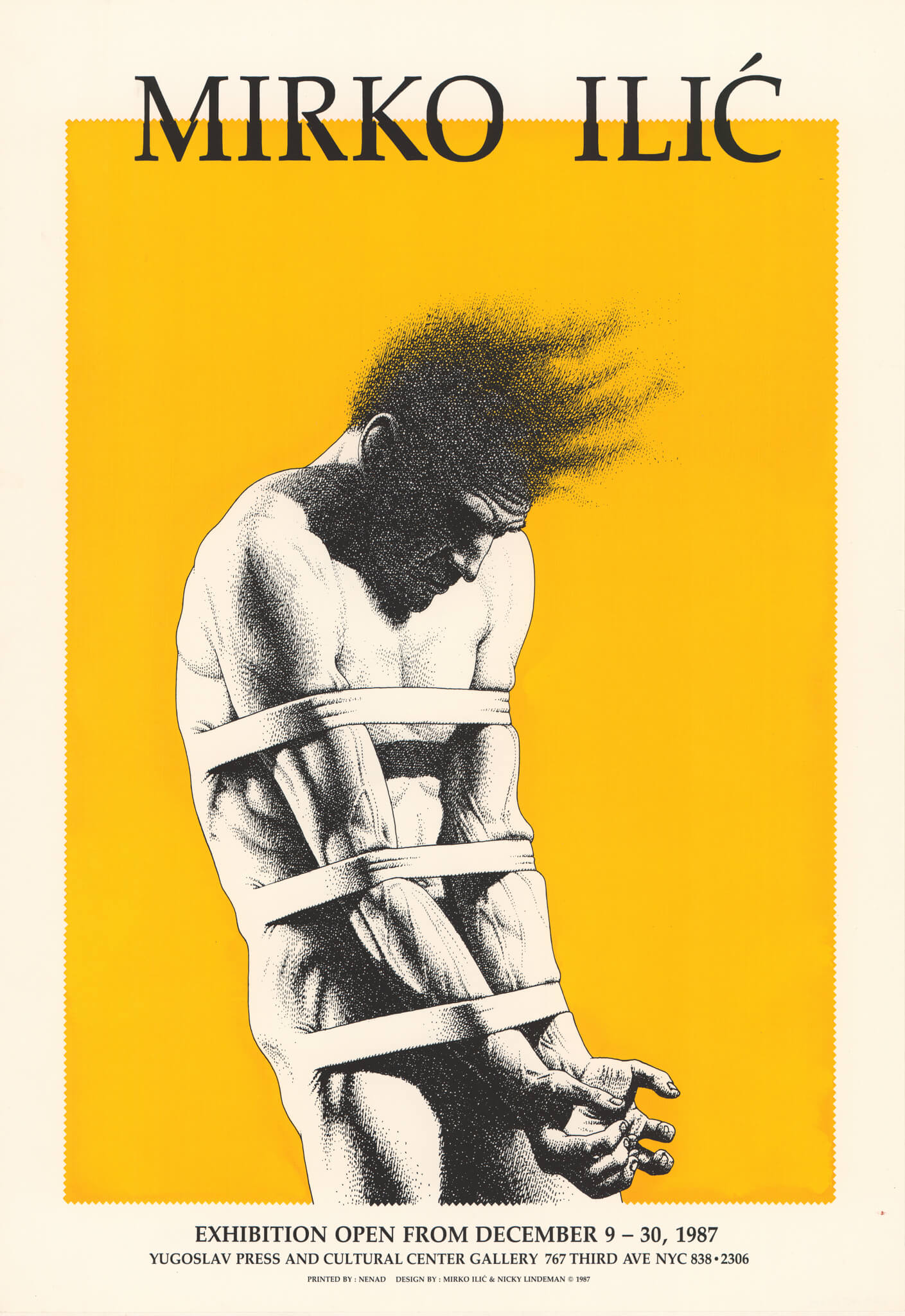 “Mirko Ilić” (1987; Mirko Ilić, Nicky Lindeman), a poster for the 1987 Ilić’s exhibition at the Yugoslav Press and Cultural Center Gallery in New York.