Marking the 30th anniversary of the battle of Vukovar, the most bitter armed conflict of the 1991-1995 Croatian Homeland War as well as the most brutal and longest battle on Europe’s territory since the Second World War, the National and University Library in Zagreb (NSK) and the Večernji list daily in partnership with the Kliofest association and Vukovar City Library are organising an exhibition dedicated to the heroism of this one of a kind city in the easternmost part of Croatia and its long and fascinating cultural heritage (Sloboda se njegovim imenom zove), with the support of the Croatian Ministry of Culture and Media and as part of the Ministry’s Year of Reading 2021 national programme.

Opening on 4 November 2021, the exhibition will feature a rich selection of photographs, manuscripts, newspaper articles and other material preserved in the collections of the National and University Library in Zagreb and the partner institutions bearing witness to the suffering of Vukovar and events surrounding its three-month siege in 1991, but also presenting this unique city’s centuries-long cultural tradition.

Texts by a historian and curator Vlatka Filipčić Maligec, making the backbone of the exhibition, will provide insight into the circumstances of the battle, especially those related to events at the Vukovar hospital, the site of the horrible Ovčara massacre, which followed Vukovar’s capture, as well as in nearby Borovo Selo. They will be accompanied by the photographs of Croatian photojournalists (Damir Radnić, Davorin Višnjić, Drago Havranek, Emica Elveđi Goran Pichler, Igor Kralj, Josip Bistrović, Marko Mrkonjić, Mišo Lišanin, Robert Belošević, Robert Šipek and Siniša Hančić) and the Večernji list frontpages documenting conditions in wartime Vukovar and the fate that befell its people during the Croatian Homeland War.

The material featured as part of the exhibition will also include a representative selection of books thematising wartime Vukovar from the Homeland War Book Collection of the National and University Library in Zagreb, the exhibition’s main initiator, which brings in one place and makes available all relevant resources on the Croatian Homeland War. Apart from books published in Croatia, by Croatian authors and in the Croatian language, the Collection, currently totalling more than 3,000 titles, includes non-book material and titles published all around the world, on various media, by authors from a wide range of countries, in many different languages thematising, occasioned or inspired by the Croatian Homeland War.

Also displayed at the exhibition will be valuable items from other collections making part of the rich holdings of the National and University Library in Zagreb, at the moment including nearly 3,8 million items, such as the Library’s Print Collection, Music Collection, Manuscripts and Old Books Collection and Map Collection, holding treasures ranging from books inspired by Vukovar, works by Vukovar writers, prints and old postcards featuring Vukovar’s most notable landmarks and vistas to Vukovar-related music manuscripts and maps. The exhibition programme will also include the presentation of a digital collection thematising Vukovar (Vukovar) and online exhibition presenting Vukovar’s culture (Vukovar – kultura danas), both created by Vukovar City Library, in cooperation with the National and University Library in Zagreb.

The authors of the exhibition are the Head of the NSK Homeland War Book Collection Hrvoje Špac, Senior Public Relations Adviser at NSK Marketing and Communications Section Maja Priselac and National Library Affairs Assistant to the Director General of the National and University Library in Zagreb Dr Sofija Klarin Zadravec. 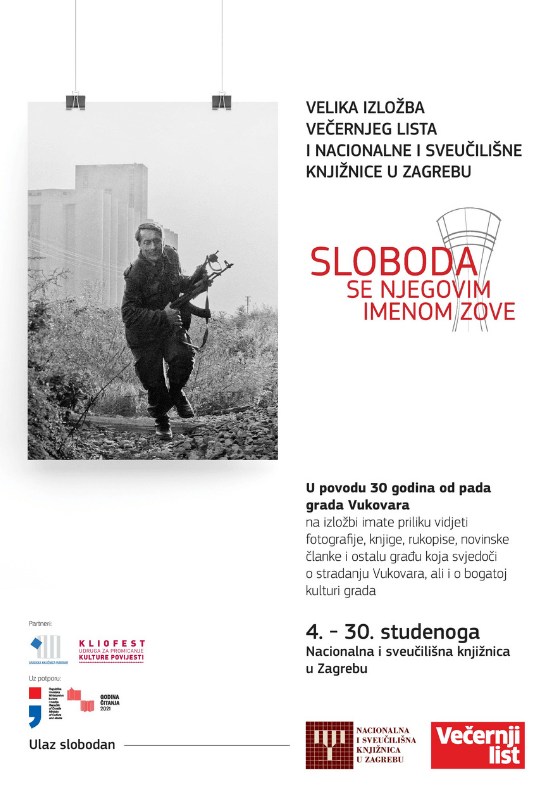