On 15 December 2021, Lauba – House for People and Art hosted the opening of Tvornička jutra (Factory Mornings), an exhibition featuring works by internationally recognised and award-winning contemporary artist Milan Trenc from his homonymous print portfolio, published by the National and University Library in Zagreb.

The print portfolio, published as part of the Year of Reading 2021 national programme (Godina čitanja) and with the support of the Croatian Ministry of Culture and Media and Adris Foundation, presents Trenc’s exploration of the relationship between the two popular 20th-century artistic styles, pop art and social realism, resulting in his departure from video, film and digital printing as the technologies he usually draws on in his work and his delving into screen printing in using panels from Maljčiki, the 1981 comic strip inspired by the homonymous hugely popular song by the ex-Yugoslav band Idoli. Its inclusion in the Print Collection of the National and University Library in Zagreb, which holds the majority of print portfolios in Croatia, is a valuable addition to the Collection’s holdings, which comprise works by many prominent graphic artists of which a large part brings a fascinating fusion of graphic art and poetry embodied in print-and-poetry portfolios.

A limited edition of 30 portfolios was printed at the screen printing workshop at the Graphic Arts Department of the Zagreb Academy of Fine Arts, while the handmade, clothbound portfolio boxes were produced by the staff of the Book Preservation and Binding Division of the National and University Library in Zagreb.

The exhibition will remain on view until 24 December 2021.

Photos from the exhibition opening are by Lorna Kijurko.

Milan Trenc (1926) is a graphic artist, illustrator, comic-strip artist, the author of animated and feature films, screenwriter and author of books. He graduated in film directing from the Zagreb Academy of Dramatic Art in the class of Professor Krešo Golik, one of the most prominent 20th-century Croatian film directors. At the beginning of the 1980s he published his first comics, at the tremendously popular 1967-1990 Croatian avant-garde youth magazine Polet and also popular student paper Studentski list, and was from 1985 to 1990 the chief illustrator for the magazine Start. From 1991 to 2004 he lived and worked in New York, US, where he published comics for the Heavy Metal comics magazine and illustrations for The New York Times, Time, The Wall Street Journal, The New Yorker, Fortune, The Washington Post, Business Week and other influential US newspapers and magazines. His illustrations in The New York Times earned him the 1993 PRINT Award and 2003 Society of Publication Designers Award. He is the author and illustrator of the children’s picture book The Night at the Museum (1993), based on which the 20th Century Fox film production studio (now 20th Century Studios) made the globally popular homonymous 2006 fantasy comedy film. The joint exhibitions that he has so far taken part in include those held at Pompidou Centre (Paris, France), Art in General (New York, US) and Sherry Frumkin Gallery (Los Angeles, US) and he held a number of solo exhibitions (Klovićevi dvori Gallery (Zagreb, 2007), Galerija Nova (Zagreb, 2008), Museum of Arts and Crafts (Zagreb, 2017), Galerija Forum (Zagreb, 2019). He is Professor at the Academy of Fine Arts of the University of Zagreb. 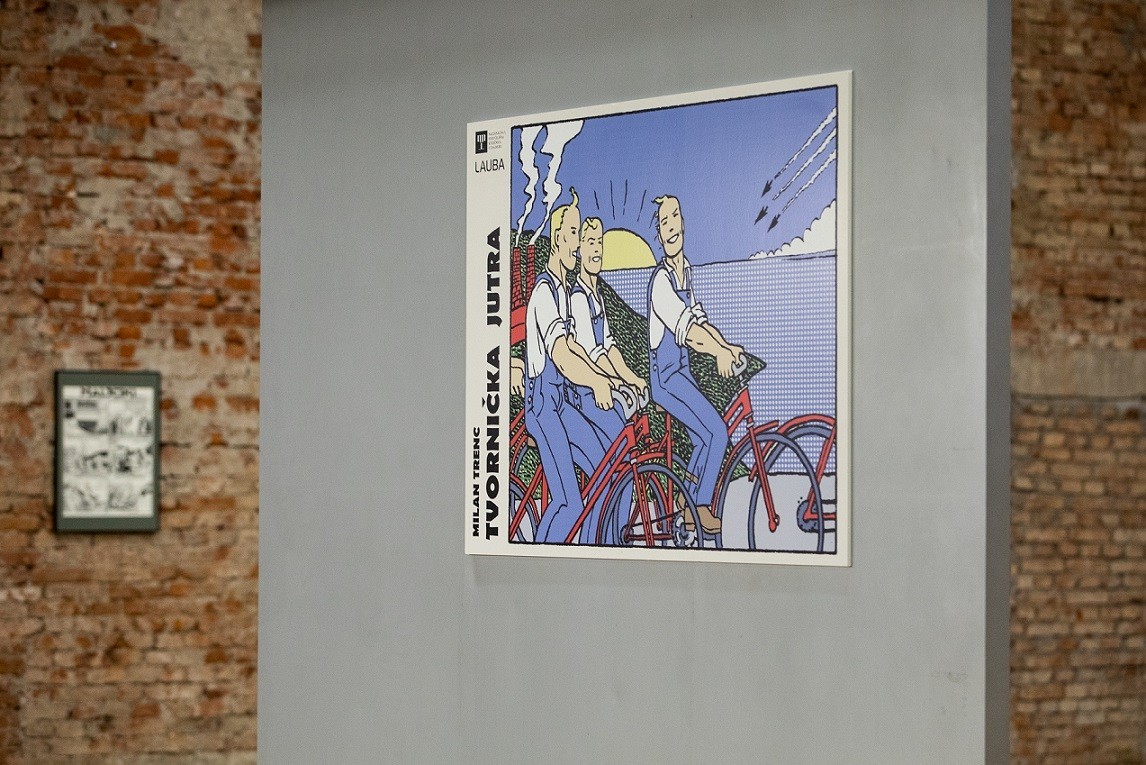 The opening of “Tvornička jutra” (“Factory Mornings”), an exhibition featuring works by Milan Trenc from the homonymous print portfolio, published by Trenc and the National and University Library in Zagreb. Lauba – House for People and Art, 15 December 2021. Photo by Lorna Kijurko.