The symbolic launching of the #NoBooksNoFuture Rocket at the National and University Library in Zagreb marked the seventh edition of Croatian Book Night, a national annual programme regularly held under the auspices of the Government of the Republic of Croatia and Croatian Commission for UNESCO at the Croatian Ministry of Culture and aimed at the promotion and popularisation of books and reading, as a way of celebrating World Book and Copyright Day (22 April) and Croatian Book Day (23 April).

The opening programme included addresses by the Special Envoy of the Croatian Prime Minister and Croatian Minister of Culture Nina Obuljen Koržinek, Croatian Minister of Science and Education Blaženka Divjak and Director General of the National and University Library in Zagreb Tatijana Petrić.

This year’s Croatian Book Night programme, which addressed issues surrounding the future of the book, was presented, on behalf of the Book Night organising committee, by Nenad Bartolčić, a representative of Knjižni blok – Inicijativa za knjigu, a pro-book association, and Moderna vremena, a books-and-culture-oriented web portal. Croatian Book Night 2018 was held in almost 300 cities and towns all across Croatia, with as many as 669 participating institutions and individuals, which prepared 1,187 different events. It is particularly encouraging, from the perspective of the sometimes seemingly so uncertain future of books, that as many as 190 primary schools, 26 kindergartens and many secondary-school and higher education institutions took part in this year’s programme.

The opening programme included the presentation of the results of the latest survey of Croatia’s book market. According to the results, which were presented by Tamara Kraus, from the GfK market research agency, in the past year 56% of the Croatian citizens read at least one book. Population with reading habits above the average standard mostly come from Zagreb, Croatia’s capital, and the northern coastal regions, and it predominantly includes people with higher education degrees, younger population and women. Books are still mainly borrowed, with fiction and prose works being the most read and poetry and comic strips being read the least. The survey also indicated that during the last three months every fourth Croatian citizen purchased at least one book. When it comes to the latest reading technologies, although 72% of the citizens have access to such technologies, they nevertheless mostly use it for reading the digital editions of newspapers and varied content made available as part of online portals and not for either reading or purchasing e-books.

Željka Miščin, from the Croatian Library Association, presented Marrakesh Treaty: Why Is It Important?! (Ugovor iz Marakeša: zašto je važan?!), a special exhibition prepared through the Association’s cooperation with the Croatian Library for the Blind and the National and University Library in Zagreb. The exhibition, authored by Miščin and organised as part of I WISH TO READ TOO!, a national campaign for persons with print disabilities, highlighted the importance of the EU Directive 2017/1564, which makes it necessary for all EU countries to integrate into their national legislations the provisions of the Marrakesh Treaty in order to enable access to all types of copyrighted works, in both print and electronic form, for blind, visually impaired or otherwise print-disabled persons.

President of the Croatian Association of School Librarians Vanja Jurilj presented the award-wining works of primary- and secondary school students selected through this year’s special art competition as part of which the young contestants had to express their ideas on how they see books, readers and book-and-reading spaces in the future (Ubaci knjigu u vremenski stroj!). Out of altogether 176 submitted works by students from 37 primary and 11 secondary schools in 15 Croatian counties, young authors proclaimed as winners were Joel Žnidaršić, from the primary school Jabukovac in Zagreb, Petra Musladin, from the primary school Ivan Gundulić in Dubrovnik, Domagoj Jaman, from the economics secondary school in Vukovar and Marijana Bratanić, from the technical secondary school in Bjelovar. Apart from the award-winning works, the competition jury selected several other works to be digitised and presented as part of the special virtual exhibition on the Book Night website during May 2018.

Mišo Nejašmić, from the Publishers and Booksellers Association of the Croatian Chamber of Economy, presented Book Friendly (Prijatelj knjige), the Book Night initiative’s latest project, aimed at business entities not strictly making part of the “book sector”, but which could greatly contribute to and at the same time profit from the promotion of books and reading. Based on clearly defined criteria, places such as social clubs, cafés, restaurants, hotels, etc., will be assigned a special Book Friendly rating, which will be displayed on a bilingual label and indicate to visitors that the place is reading-friendly, whether in terms of it offering books or providing reading-stimulating conditions and atmosphere.

Leon Gospodarić, a young Croatian musician, gave a special performance as part of the opening of this year’s Book Night, which Minister Obuljen Koržinek termed a high-profile Croatian cultural brand. 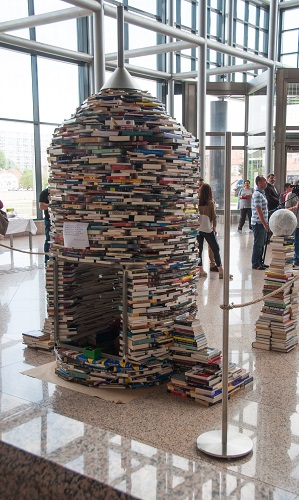 The #NoBooksNoFuture Rocket symbolising the message of Croatian Book Night 2018.