Judita by Marko Marulić, a Croatian writer and one of the most well-known European dramatists, is currently being highlighted by The European Library (TEL) on its portal as well as its Facebook and Twitter profiles. This great treasure has been presented as part of TEL Library of the Month campaign, which during this July is spotlighting the National and University Library in Zagreb.

Marko Marulić (Marcus Marulus Spalatensis, 1450–1524) was born and died in Split as a central figure in the Split humanist circle. His epic poem Judita (Judith) earned him the title of the father of Croatian literature and that of the Croatian Dante.

Judita is a Biblical-Virgilian epic poem in the Croatian language and Chakavian dialect based on the story of the brave widow Judita from the Old Testament who saved Bethulia by seducing and murdering the Assyrian general Holofernes. Although the plot was taken over from the Bible, it allegorically reflected the contemporary conditions of Marulić’s time which were characterized by fear and insecurity brought about by the Ottoman invasion, which reached the gates of his native Split. The epic was completed in 1501 and printed in 1521, and the author himself lived to see its three editions. The 1522 edition, decorated by nine woodcuts depicting various scenes of war, is preserved in the Manuscripts and Old Books Collection of the National and University Library in Zagreb.

Judita consists of 6 cantos written in a unique verse characteristic of Croatian cultural space – a twelve-syllable verse with a double rhyme in which Marulić also uses a characteristic cross rhyme. This complex and demanding versification scheme reflected all the skill and agility of Marulić’s poetic talent. Whereas he structured his epic by following the poetical conventions of humanist poetry, he celebrated the beauty of Judita in the manner of Petrarch.

Marulić is one of the most translated Croatian writers of all times. During his life his most popular works were in Latin, although he wrote in Croatian and Italian as well. The work De institutione bene vivendi per exempla sanctorum (Venice, 1506), offering guidance for a virtuous life through the examples from the lives of saints, was a hugely popular title of the 16th century and it went through some 60 editions in many European languages: Italian (Venice, 1563), German (Cologne, 1563), Portuguese (Lisbon, 1579), French (Douai, 1585), Czech (Prague, 1621). Francis Xavier brought it with him on his famous missionary journey as the only book apart from a breviary and catechism.

Marulić is also the author of many other significant works: Evangelistarium (Venice, 1516), Quinquaginta parabolae (Venice, around 1510), De humilitate et gloria Christi (Venice, 1519), Epistola … ad Adrianum VI. (1522), De laudibus Herculis (Venice, 1524), Davidias (Zagreb, 1954), and others. In 1995 until then unknown verses in Latin by Marulić, in which he appears as a poet of both love and satire, were discovered at the University of Glasgow Library (Glasgowski stihovi (Glasgow verses), Zagreb, 1999).

In 1999 Judita got its CD-ROM version Klasici hrvatske književnosti I. – epika, romani, novele, and presently its full text is available on the website of the Zagreb based electronic publishing company Bulaja naklada.

Learn more about the activities and services of The European Library. 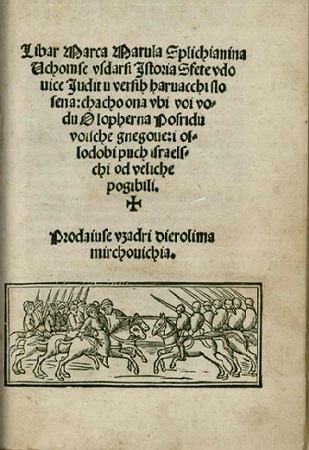