On 22 April 2022, starting at 12.00, the National and University Library in Zagreb will host the opening of the 11th edition of Croatian Book Night, Croatia’s annual national programme marking World Book and Copyright Day (23 April) and Croatian Book Day (22 April), focusing on the popularisation of reading and promotion of books and prompting a wider public debate on the social status of the book and the importance of values associated with it in the contemporary society.

Always attempting to respond to current social circumstances, which for the previous two years have so conspicuously been marked by a sense of crisis, the organisers of the 2022 Croatian Book Night decided to make freedom its theme and make its programme an exploration into books as a medium for expressing, enjoying, inspiring and encouraging freedom.

Also spotlighted this year are two significant anniversaries – the 400th anniversary of the birth of the great French writer Molière, originally Jean-Baptiste Poquelin (1622-1673), who exercised his freedom and wittily addressed the flaws of his age through farce and comedy, owing to which he was often put under pressure and faced severe censure, as well as the centenary of the birth of Vesna Parun (1922-2010), one of the greatest authors of Croatian literature and the most translated Croatian woman poet, whose oeuvre, in all its abundancy and diversity of themes, genres and forms, vividly epitomises freedom.

The programme of this year’s Croatian Book Night will last for full four days, until 25 April 2022, and feature more than 1,200 events and initiatives in 250 cities and towns all across Croatia. It has been joined by 150 public libraries, over 100 bookstores, antiquarian bookshops and publishing companies, 300 schools as well as kindergartens, universities, theatres, bodies of local administration, student communities, senior citizen’s homes, cultural centres, etc. Among its participants there will be many writers, artists, storytellers and other creative individuals and its locations will include prisons, castles, cafés, trains, orchards, public squares, churches and even a brewery and a mushroom picking site.

The 2022 Night’s launch at the National and University Library in Zagreb will include the presentation of the results of the latest survey of Croatia’s book market as well as Perica, this year’s Night’s mascot, a jester embodied by stage actor Igor Baksa and based on Petrica Kerempuh, a peasant trickster from Croatian folk tales at the centre of one of the most accomplished and well-known satirical works in Croatian literature, Ballads of Petrica Kerempuh (Balade Petrice Kerempuha, 1936), by Miroslav Krleža, undoubtedly the greatest Croatian writer of the 20th century and one of the greatest Croatian writers and thinkers of all time. 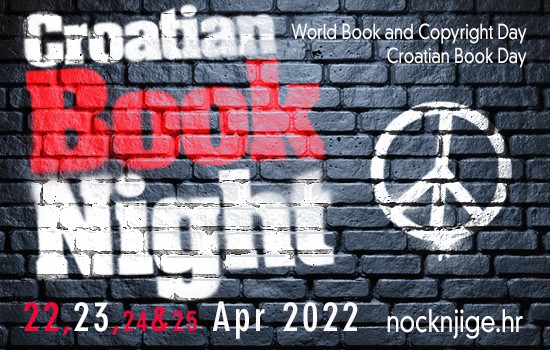