Over 1,100 programmes on 223 locations all across Croatia spotlighting the importance of books and reading were held on 23 April 2021 as part of the celebratory, tenth edition of Croatian Book Night, one of the most popular mass cultural events in Croatia. The overview of the previous nine editions of this successful national initiative, traditionally marking World Book and Copyright Day (23 April) and Croatian Book Day (22 April), is the focus of a special retrospective exhibition currently on view at the Central Library of the Zagreb City Libraries public library network, authored by Vanja Štalec Obradović and Ivana Radenović (Moćna desetka: 10 godina Noći knjige).

This year’s Croatian Book Night programme, closely associated with the initiative of the Government of the Republic of Croatia as part of which the year 2021 has been declared the Year of Reading (Godina čitanja), was joined by more than 300 schools, kindergartens and other cultural and scientific institutions, 130 libraries and 120 bookshops, and included interesting programmes organised by hospitals, tourism organisations, various associations, bodies of local administration, children’s and senior citizen’s homes, etc. Along with the part of the programme that was held online, a considerable part of it took place on a wide range of outdoor locations – in parks, by the rivers and the sea, in front of libraries, in squares and on streets, even on boats and trains.

Also, in a spirit of celebration, a classic of Croatian contemporary children’s and young adult literature, a series of novels by Hrvoje Hitrec (1943-) portraying the lives and adventures of the unforgettable Vragec brothers (Smogovci, 1976; Smogovci i strašni Bongo, 1987; Zbogom, Smogovci, 1989; Smogovci i biće iz svemira, 1993; Smogovci u ratu, 1994), has been immortalised as a result of the 2021 Croatian Book Night Organising Committee’s cooperation with the Croatian Association of Artists and the Zagreb Academy of Fine Arts, in a mural authored by Mia Matijević, in Peščenica, one of the old neighbourhoods in Zagreb, Croatia’s capital, and the site of the adventures and misadventures of the Vragec family.

On top of all that, this celebratory edition of Croatian Book Night included a special humanitarian initiative, jointly organised by the Croatian Book Night Organising Committee, the Embassy of the Russian Federation to the Republic of Croatia and Petrinja-based Association for the Promotion of IT, Culture and Coexistence (IKS), as part of which a temporary settlement put up in Glina following the devastating earthquake that hit this town and the entire surrounding region in December 2020 is to get a special container that will house the children’s library and playroom.

The great Fyodor Mikhaylovich Dostoyevsky, the 200th anniversary of whose birth and 140th anniversary of whose death we are celebrating this year, left us this profound thought: When wealth is lost, nothing is lost; when health is lost, almost all is lost. This year’s Croatian Book Night set out to find answers to the following questions – can books help us, and how, to maintain our health as individuals and that of the entire society? What books would we “prescribe” for ourselves, and others, and why? Are there books that can be recommended as a cure for each age? What reading would we say can save us in the turbulent times that we live in today?

Owing to the still present anti-epidemic measures, this year’s Croatian Book Night programme did not open at the National and University Library in Zagreb, Croatian Book Night’s traditional host, but on on the Third Channel of the Croatian Radio Television, in a special TV broadcast that featured interesting guests and presented the results of the latest survey of Croatia’s book market.

The Croatian Book Night’s tenth anniversary successfully proved that health is not merely not being ill, but having books in our lives! 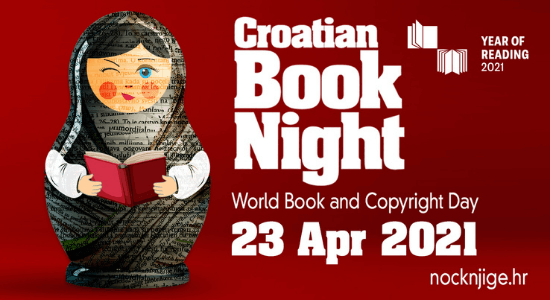 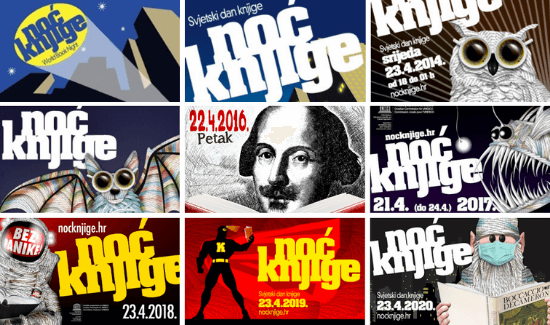 In 2021, Croatian Book Night, the most popular mass cultural event in Croatia spotlighting books and reading, is celebrating its tenth anniversary.