Book Art in Croatia provides a historical overview of techniques and styles employed in the production and decoration of books in Croatia since the Middle Ages to contemporary times, thus featuring the most rich array of manuscript and printed books, ranging from medieval evangelaries and missals to modern attractively illustrated publications and print portfolios bringing together visual arts and literature. Owing to their outstanding design, i.e. the skilful use of various book decoration techniques to add a telling visual dimension to – and thus accentuate – literary content, the digitised versions of sixty selected works displayed at the exhibition represent the greatest achievements in book design in Croatia.

The exhibition will also feature a selection of some of the greatest treasures from the Library’s Manuscripts and Old Books Collection, such as the first printed Croatian book Misal po zakonu rimskoga dvora (Missal by the Law of the Roman Court), as well as other books representative of Croatian heritage – Senjski glagoljski misal (Senj Glagolitic Missal), Misal hruacki (Croatian Missal), Evangeliarium Spalatense (Splitski evanđelistar), and others. 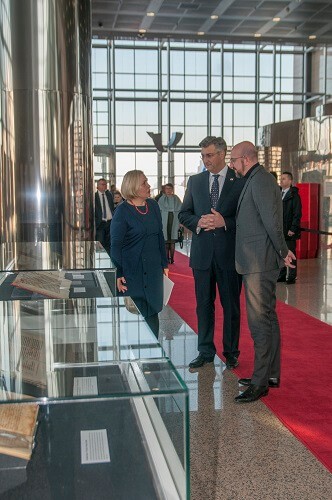