„Anton Cetín“ at the National and University Library in Zagreb

Anton Cetín, the Library’s exhibition put on as a way of marking the eightieth birthday of a great Croatian and Canadian painter Anton Cetín, will open on 27 September 2016 (side lobby, 12.00).

In 2015, this remarkable Croatia-born artist, who has lived and worked in Canada for the last 40 years, donated to the Print Collection of the National and University Library in Zagreb as many as 80 pieces of his work, thus enriching both a previously existing Library’s collection of his works, as well as the Library’s entire collection.

The exhibition features a selection of drawings, prints and collages that Cetín made in the period between 1962 and 2015. Such a substantial body of work, covering a period of more than half a century and containing works created in such a wide variety of artistic media, represents a whole that even art galleries may rarely boast.

Looking at Cetín’s rich artistic work, it is difficult to tell apart Cetín the printmaker from Cetín the painter. Rare are the artists manifesting such a wide array of artistic abilities. Creation pouring out from such variety not only enables the blending of the finely nuanced specific qualities of different artistic media, but makes possible their mutual intertwining and dynamic interaction.

Cetín is an artist of unique artistic personality and highly refined aesthetics. The beginning of his artistic path goes as far back as his early childhood. This path led him to Paris, where an image of a woman, later to be named Eve, with or without a bird, was born. This iconographic motif and visual metaphor permeates Cetín’s entire work as an inexhaustible source of inspiration and his original artistic tribute to womanhood, fertility and love. His paintings, characterised by strong surrealist connotations, abound with images of fragile women, birds, houses, constructions from outer space and the like, which Cetín all uses to create an ideal and imaginary space, do away with perspective and depth and, through his characteristic capacity for synaesthesia and deep emotion, build his compositions in the medium of the lyrical. Liberated from the rules of anatomy and proportion, Cetín freely reduces his Eves to a form, whose sensuality and lyrical quality emanates from a soft, curved, and above all, firm line, which he often uses as a borderline. Depending on the atmosphere or emotion that Cetín wishes to evoke, this line can be thin and delicate as a thread or thick and revealing clear traces of the brush, thus emphasising the intensity of colour.

Cetín’s focus on inward and spiritual preoccupations keeps him far from imitative art and anchors him in an artistic realm rich with associative and symbolic forms and figures. The firmness of his lines and subtle interactions between colours render his artistic forms poignantly expressive. Through directly addressing our senses, Cetín attempts to reach deeply into our spiritual and emotional states such as happiness, love, pain, joy, and bring them to the surface by means of his unique art.

The exhibition will be on view until 7 October 2016. 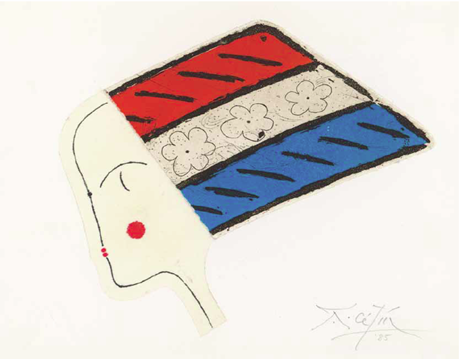