As a way of marking Reformation Day, on 31 October 2017, the National and University Library in Zagreb hosted the presentation of a facsimile edition and the accompanying transliteration of Artikuli ili Deli stare krstjanske vere, a valuable 16th-century work printed in the Glagolitic alphabet.

The book, which has so far been unknown in Croatia’s cultural circles due to its not being available in the Latin script, was originally presented on 20 October 2017 at the Faculty of Humanities and Social Sciences, University of Osijek, as part of the international interdisciplinary symposium dedicated to the 500th anniversary of the writing of Martin Luther’s Ninety-five Theses (Reformacija u Europi i njezini odjeci: povodom 500. obljetnice Lutherovih teza).

The publication of this facsimile edition has been realised as part of Hrvatska glagoljica (Croatian Glagolitic Heritage), a project that the National and University Library in Zagreb is running in collaboration with other Croatia’s leading cultural institutions such as the Croatian Academy of Sciences and Arts, Old Church Slavonic Institute in Zagreb and others, for the purpose of bringing together in one place all works of the Croatian Glagolitic heritage, in both the print and electronic format.

Artikuli ili Deli stare krstjanske vere (1562) represents one of the most interesting works of the Urach printing house. It is essentially the Croatian translation in the Glagolitic alphabet by Anton Dalmatin and Stipan Konzul of the Augsburg Confession (Latin Confessio Augustana) by Philipp Melanchthon, a notable German Lutheran reformer, professor at the University of Wittenberg and a close friend of Martin Luther, which significantly relies on the Slovenian translation of the same work by Primož Trubar.

The book has 124 leaves in the octavo format, containing altogether 248 pages. The volume containing the Latin transliteration includes descriptions of distinctions between the Glagolitic and a corresponding Cyrillic edition, which gives it a particularly great scholarly value. The original copy of Artikuli used in the publication of this facsimile edition, along with a copy of the Cyrillic edition, is preserved at the Manuscripts and Old Books Collection of the National and University Library in Zagreb.

The transliteration was prepared by a team of specialists from the Faculty of Humanities and Social Sciences at the University of Zagreb consisting of Mateo Žagar, the facsimile’s editor-in-chief, Blanka Ceković, Ivana Eterović and Tanja Kuštović, with Fellows of the Croatian Academy of Sciences and Arts Stjepan Damjanović and Anica Nazor acting as consulting editors.

The team of the National and University Library in Zagreb consisting of Darko Čižmek, Goran Hasanec and Sandi Antonac, the edition’s technical editor, along with Tomislav Goršić, digitised the entire original material and worked out graphic design solutions. The ITG d. o. o. printing company from Zagreb successfully tackled challenges associated with the printing and binding of this priceless work, now available for HRK 700 (€93).

This undertaking has been preceded by the publication of the reprint of Misal hruacki, the 1531 Glagolitic missal by Šimun Kožičić Benja, with an accompanying transliteration and a critical analysis, while the same team is currently working on the transliteration of Korizmenjak, the 1508 collection of lent sermons, also written in the Glagolitic script. 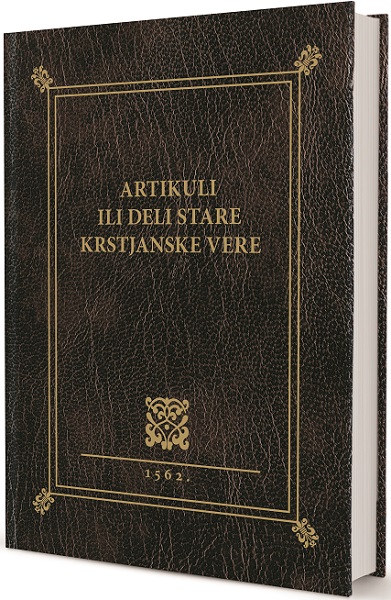