“A coral, a rock, a woman”: NSK marking centenary of the birth of Vesna Parun

On 11 April 2022, the National and University Library in Zagreb (NSK) organised and hosted A coral, a rock, a woman (Žena koralj, žena hrid), a special get-together marking the centenary of the birth of Vesna Parun (1922-2010), one of the greatest authors of Croatian literature and the most translated Croatian woman poet. The event included the opening of an accompanying exhibition, which will remain on view until 23 April 2022.

Prompted by the hundredth anniversary of the birth of the great Vesna Parun, we delved into the Library’s holdings and reached for Parun’s legacy in its collections, to bring to the surface the treasures for which we are all profoundly indebted to Parun. Still, I am convinced that even if our gathering today was not occasioned by this great anniversary most of you would nevertheless make an effort to be part of an event focusing on Parun, since the power of her word, the entirety of everything that she was and is never fails to attract, awaken the mind, act as a mirror, inspire and, above all, fascinate us with its beauty, said the Director General of the National and University Library in Zagreb Dr Ivanka Stričević greeting the audience.

The participants in the get-together, journalist and book editor Denis Derk, painter, graphic artist and designer Zdenka Pozaić and stage actress Marija Sekelez, who all personally knew Parun and closely collaborated with her, reminisced about Parun, her work and legacy. Sekelez gave a highly inspired performance spotlighting Parun’s brilliant oeuvre, a treasure chest bursting with unique poetic images and exceptional feats of language capturing the finest nuances of realities it thematises.

The accompanying exhibition features resources in the Library’s Print Collection, Manuscripts and Old Books Collection and Music Collection, along with material included among other NSK holdings, ranging from Parun’s manuscripts, through print portfolios including her verses, to manuscript music to which Parun’s poems were set. Also displayed at the exhibition are the photographs of Parun by a notable Croatian photographer Zlata Vucelić and a mural linking the celebration, its main motif and one of  Parun’s best known poems (Coral returned to the sea) created under the supervision of the Dean of the Zagreb Academy of Fine Arts Professor Tomislav Buntak and artist Dr Melinda Štefčića, authored by Nika Vrbica and co-painted by Anđela Majica, Ena Antunović and Marta Dijak, all students of the Academy. 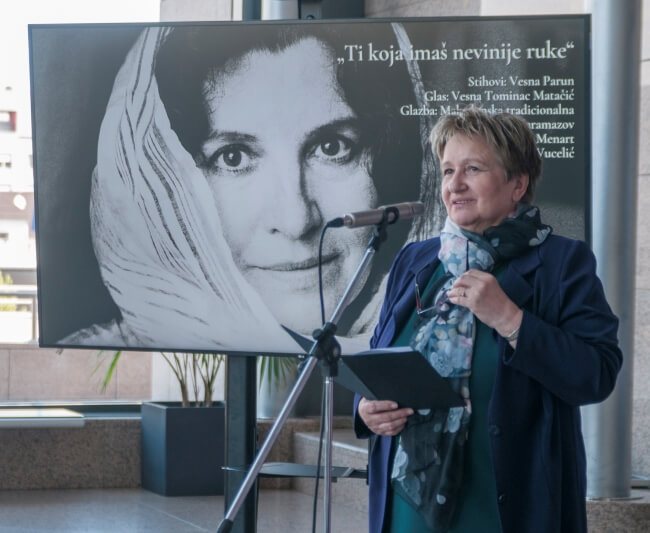 NSK Director General Dr Ivanka Stričević at “A coral, a rock, a woman” (“Žena koralj, žena hrid”), a special get-together and the opening of an accompanying exhibition marking the centenary of the birth of Vesna Parun (1922-2010), one of the greatest authors of Croatian literature and the most translated Croatian woman poet. National and University Library in Zagreb, 11 April 2022.