Croatian Book Day, established by the 1996 decision of the Croatian Parliament and celebrated on 22 April to commemorate the date of the printing of the most famous work of the canonical writer of Croatian literature Marko Marulić (1450-1524), this year marks the 500th anniversary of its historical background.

The year 1521 was the year of the printing of Judita, the first Croatian epic, which earned Marulić the designation of “the father of Croatian literature”, as well as that of “the Croatian Dante”. Marulić wrote it in 1501 and lived to see its three subsequent editions. Owing to his skilful original adaptation of the Biblical theme and motifs in the Croatian vernacular, the significance of Judita far surpasses the bounds of Croatian literature and represents a relevant work of the European Renaissance, owing to which it has been translated into English, Hungarian, Italian, French, Lithuanian, and partially into Slovenian, Spanish and German.

There are many facets and layers to the connection between Marulić and the National and University Library in Zagreb on the one hand and everything that Marulić stands for in Croatia’s culture and history on the other. Marulić is the very symbol of the Croatian written word, while the Library, as both the guardian and treasure trove of Croatian written heritage throughout centuries, only reinforces his privileged position in Croatian and European literature, especially through resources in its collections with direct and indirect connections to Marulić.

The Library’s Manuscripts and Old Books Collection holds the 1522 edition of Judita, whose digitised version is available as part of the Library’s Digital Collections web portal, which also offers access to the digital collection of works by Marulić (Digitalna zbirka djela Marka Marulića). Marko Marulić – A European Humanist, an exhibition that the Library organised in 2020 as part of its programme presenting rich and varied Croatian cultural heritage during Croatia’s presidency of the Council of the European Union, will be put on at the Marko Marulić City Library in Split as part of marking the 2021 Croatian Library Day.

Find out more about the unique value of Marulić’s work and learn about interesting details of his life by visiting the Library’s Marko Marulić virtual exhibition. 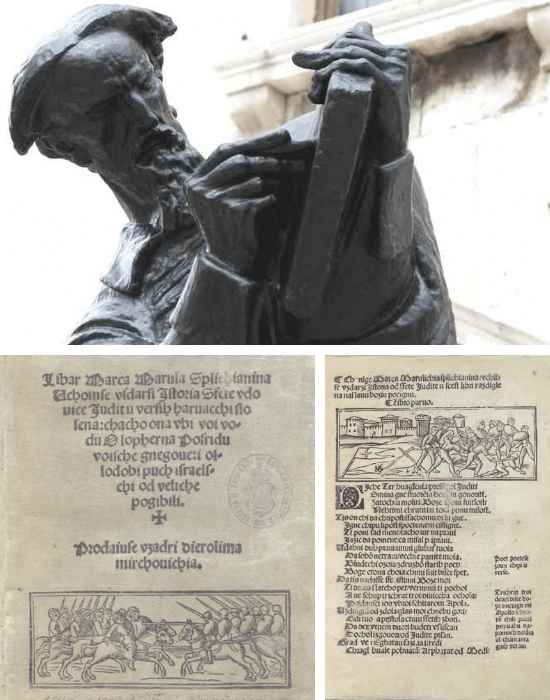